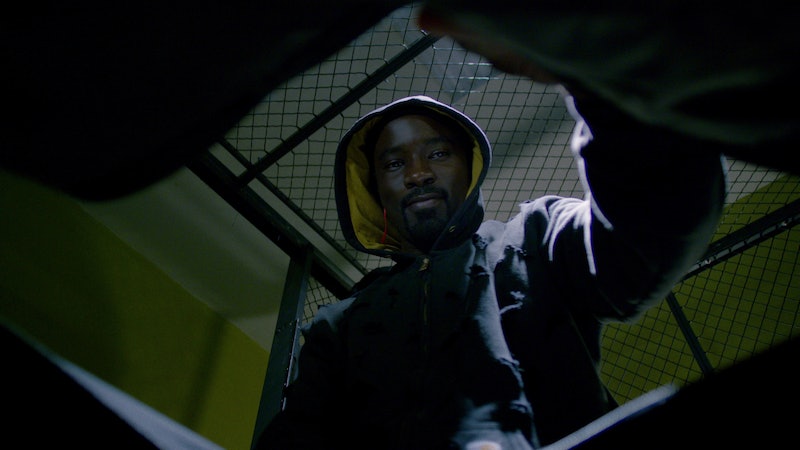 Netflix's Luke Cage has finally premiered, but it's not just the hero that's been capturing the hearts of audiences. It's also the show's unique, '90s hip-hop styled soundtrack. The music in Luke Cage strives to make audiences feel as if they are a part of Harlem's "long, rich culture of music," and it's a goal that, in all 13 episodes of the series, musical composers Adrian Younge and Ali Shaheed Muhammad completely master. One of the numerous hits incorporated over the show's first season is Method Man's "Bulletproof Love," a Luke Cage-exclusive song that has now received a Luke Cage-exclusive music video. The video is exactly what fans need to reflect on the groundbreaking first season, as it encompasses everything that made the show such an amazing entry into the Marvel canon.

Visually and lyrically, "Bulletproof Love" acts as the perfect spoiler-free of the show. The video features images of the locations, the characters, and Cage's history leading up to where he is now. In this way, fans are able to reflect on the power Cage has and the tough front he must put up when confronting those from his past who now recking havoc on his present.

If Luke Cage isn't your favorite Marvel superhero yet, perhaps watching this brief two-minute music video will change your mind.

It's not just the visuals of the music video that make "Bulletproof Love" the perfect companion to watching the show. The message behind the lyrics of Method Man's "Bulletproof Love" also helped. As previously mentioned by Bustle writer Jack O'Keefe, the song paints a picture of life in Luke Cage's Harlem, with lyrics such as, "Can’t understand a man if you ain’t lived what he lived." On top of that, the song acts as a narrator for some of the events within the series, with lines line, "And he bulletproof, shoot, what kind of caliber is this?" But now, with a music video to go with those words, the message of the song seems even stronger.

Method Man's "Bulletproof Love" music video is the perfect recap of both the story and the overall vibe of Luke Cage. And, if nothing else, it's the perfect balm for Marvel fans already anxiously awaiting Luke Cage Season 2. Of course, nothing can replace actually having Luke Cage Season 2, but it's nice to know that you can watch a music video and listen to a song during those times when you don't have a few hours to marathon the entire series all over again.

More like this
If 'Entergalactic' Season 2 Happens, You Could Get A New Kid Cudi Album
By Kadin Burnett
Netflix Reveals First Look At Wednesday In The 'Addams Family' Spinoff Series
By Bustle Editors
Everything To Know About Taylor Swift’s 10th Studio Album, 'Midnights'
By Grace Wehniainen and Jake Viswanath
The Spice Girls Just Dropped A Brand New Music Video
By Sam Ramsden
Get Even More From Bustle — Sign Up For The Newsletter