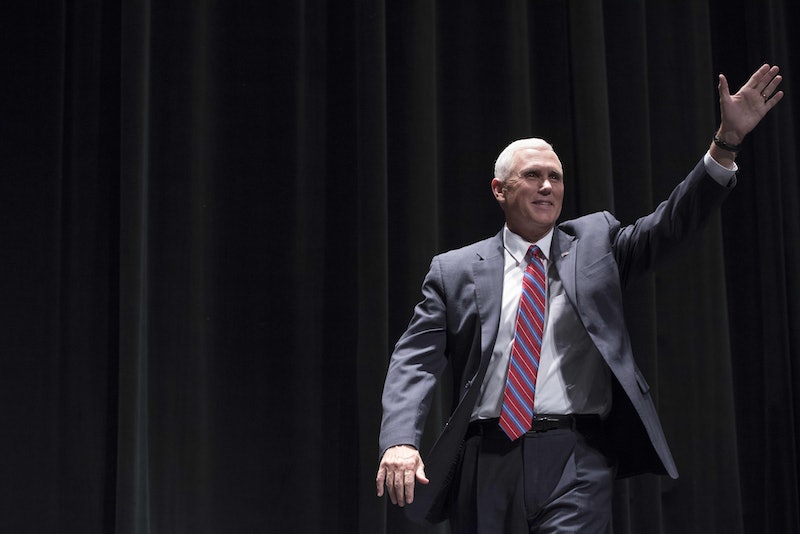 While the vice presidential debates — and, frankly, the VP candidates themselves — don't really move the needle all that much in presidential elections, the VP race has recently been... surprisingly entertaining. But on Tuesday night, when the two running mates square off at Longwood University in Virginia, the tasks for each candidate will not be equal. While Democrat Tim Kaine might get a few questions about the issues facing his running mate, Hillary Clinton, the person with the hardest job in politics will be Republican Mike Pence, running mate of Donald Trump.

Pence's selection as VP for the Republican ticket back in July was received by many in the GOP with a sigh of relief. Trump had reportedly been considering other fellow firebrands, like New Jersey Gov. Chris Christie and former House Speaker Newt Gingrich, for the number two slot. Many saw Trump's choice of Pence as an attempt to appeal both to conservatives and evangelical Republicans.

Though Pence and Kaine have a lot in common — both have served as congressmen and governors, both born Catholic (though, while Kaine is a practicing Catholic, Pence appears to have embraced more Evangelical religious practices), both are relatively unknown outside of their states prior to their nomination, and both are running with extremely unpopular candidates at the top of their tickets.

But Trump is significantly more unpopular than his Democratic opponent, and more importantly, has been dominating negative headlines in the week leading up to the VP debate. Pence will undoubtedly have to answer for at least some of his running mate's missteps.

After performing poorly in the first presidential debate last week, Trump got into a media mud-fight with Alicia Machado, a former Miss Universe winner and current Clinton advocate. Clinton mentioned Machado during the debate as an example of how Trump treats women; Trump had called the pageant winner "Miss Piggy" after she gained weight, and "Miss Housekeeping," referring to her Venezuelan nationality (Machado has since become a U.S. citizen).

Trump faced additional bad headlines this past weekend. The New York Times reported that an analysis of leaked tax returns showed that Trump claimed a $916 million loss in 1995, leading to speculation that he could have avoided paying taxes for nearly two decades. Trump has refused to release his tax returns, the first presidential candidate to do so in more than a generation.

The likelihood that Pence will be asked about all these controversies is only half of his challenge, though: He'll need to have an answer for how he squares these (and other scandals) with his faith while there's a devout, practicing Catholic challenging him. Kaine has shown his ability to speak about his faith with poise, and even marry it with his political actions when the two seem to contradict each other. Moreover, while Kaine's running mate has had plenty of her own challenges on the campaign trail, Clinton's latest bumps in the road — the question of her health, and her comment about Trump supporters being "deplorables" — haven't been as much in the headlines lately.

Both Pence and Kaine are seasoned politicians with gubernatorial and congressional campaigns under their belt, and either one could conceivably triumph in Tuesday's debate. But after a problematic week for the Trump campaign, Pence will certainly have his work cut out for him.

And when it comes to the whole election, you'll have your work cut out for you, too. Don't forget to vote for the candidate of your choice — and if you're not yet registered, you can do so below.