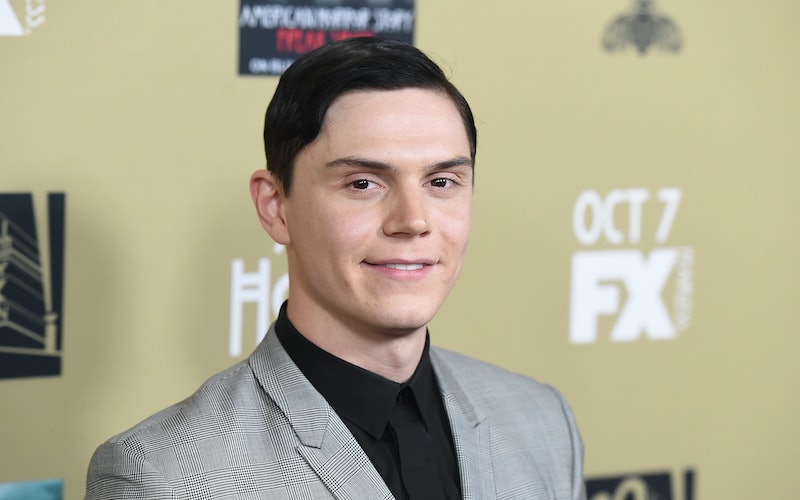 When I learned that American Horror Story was staying mum about the theme of Season 6 until the show's premiere, I didn't think that the series would continue its super mysterious ways all throughout the season. Yet that's exactly what seems to be happening on American Horror Story: Roanoke, and though it's seriously frustrating to be in the dark about what's really going on in this chapter of Ryan Murphy's horror anthology series, speculating about what's to come next is also part of the fun. One thing that's not so fun is waiting to see when Evan Peters will return to American Horror Story in Season 6, because seriously, it's been waaaay too long since fans have seen the beloved AHS vet. Peters' character is cloaked in mystery, but one theory suggests there's a good reason for that — could Peters be playing a relative of Freak Show 's Dandy Mott?

It's totally plausible. Peters hasn't yet been seen on American Horror Story: Roanoke, though he is listed in the series credits. Though some fans have theorized that Peters is actually the "pig man" of the Lost Colony, so far, there's no concrete evidence that shows he's under that particular mask. However, one clue from creator Murphy's interview with Entertainment Weekly suggests that there could be at least one role opening up for Peters, and given his experience tackling a plethora of different characters, it's possible that Murphy saved this intriguing part for him. According to Murphy, we'll explore the history of Dandy and the rest of the Mott family in Roanoke, and it's possible that this is how Peters will factor in to the series.

Murphy also teased that the new season will "explain how the Motts began," which implies that the series will go back in time via flashback. As fans know, Freak Show took place in the '50s, while the new season is mostly set in present-day North Carolina. It's possible that the show will backtrack to years before the events of Freak Show and show how Dandy's seriously messed up family began their crazy — perhaps with Peters playing the part of one of Dandy's disturbed relatives. Given Dandy's affinity for murder, and Peters' prowess at playing some of the most demented of characters (James March is definitely not someone you want to run into while on vacation at the Hotel Cortez) it's possible that Peters will be playing a Mott relative almost as evil as Dandy himself.

Of course, this is pure speculation: Peters has been frustratingly silent on the role he's playing on the new season of AHS. In fact, the only thing he has been able to say is that his dyed red hair is for his role on American Horror Story, as seen in the video below.

Fortunately, that red hair might be an indication that he is playing a relative of Dandy's. Francis Conroy portrayed Gloria Mott on Freak Show, and as per usual, rocked her signature red hair:

Perhaps the Mott family is actually a story of Gloria's rise, as opposed to the official Mott lineage. Gloria did tell Dandy that their family was full of inbreeding, which produced the occasional psychopath. (Casual.) Perhaps we'll finally get to see one of those psychopaths in action — this time, portrayed by fan favorite Peters.

More like this
'The Ex-Wife’s First Look Pics Are Giving 'Gone Girl' Vibes
By Bustle UK
24 Years Ago, 'Friends' Dropped Its Most Underrated Ross & Rachel Episode
By Grace Wehniainen
Netflix Reveals First Look At Wednesday In The 'Addams Family' Spinoff Series
By Bustle Editors
What Reporting On The UK’s Most Prolific Cyber Stalker Taught Me
By Sirin Kale
Get Even More From Bustle — Sign Up For The Newsletter