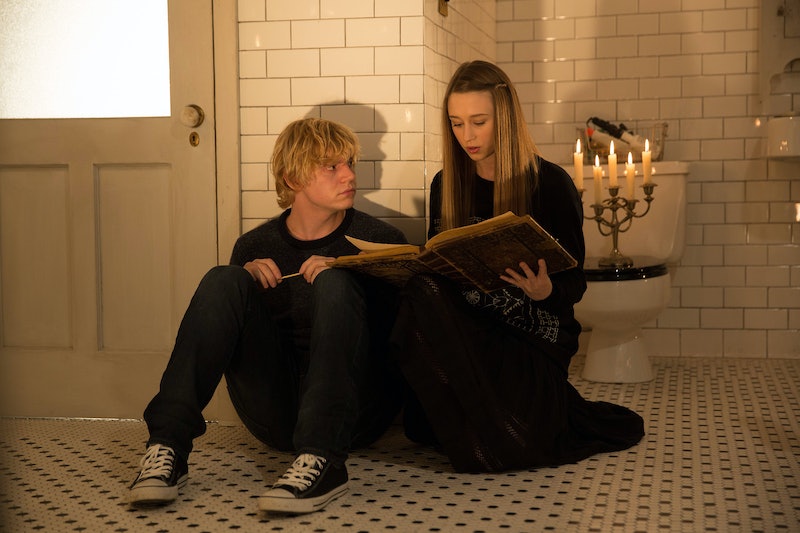 Ryan Murphy loves to have things both ways — like killing off beloved characters just to have it all revealed to be a hallucination, or, say, claiming American Horror Story is a miniseries only to then taunt us fans by suggesting there are clues that connect all four seasons. Evan Peters is one of the few actors who's appeared in all four seasons as four different characters (I believe only Sarah Paulson, Jessica Lange, and Frances Conroy can say the same). But are all of Evan Peters' AHS characters connected? It's possible. While his characters can be pretty different, or at least seem different compared to Jessica Lange's performances, the writers have worked in enough similarities that might point at the seasons' connective tissue.

There's maybe a tiny chance that his characters could be related to one another — Ethel Darling is clearly from somewhere on the East Coast, so a young Kit Walker could be her nephew twice removed or something. But more than literal familial connections, Peters' characters cover a lot of the same thematic territory, which can help us predict where Season 4 might be taking Jimmy Darling.

Peters' characters are usually strong-armed by a mother or a mother figure. First there was Tate's mother, Constance, who seemingly sat idly by while her child was planning and executing a school shooting. Then, he was tormented by the mother surrogate Sister Jude. As a shift in Season 3, Kyle's mother in Coven was an implied sexual abuser who Kyle murdered in a rage.

Usually, these mothers will be paired with absentee fathers, like Dell was earlier in the season before he and Jimmy reunited. So far, Ethel has seemed like one of the fairest and most moral characters in the freak show, but AHS history suggests that they'll ultimately be at odds.

More of a quirk than anything, twice now Peters has been in a three-person relationship, first when Kit married both Grace and Alma, then when Madison seduced both Kyle and Zoe while staying in the witches' academy. And it looks like we're being set up for another love triangle — because even when in bed with Maggie, Jimmy keeps thinking about the twins, and we know that Dot has some feelings for him.

Here's the most interesting similarity I've noticed about Peters' roles on AHS: every single character he's ever played — with the exception of Jimmy Darling so far — has died. And all three of them were then revived, living on in some form, be it as a ghost in Murder House, given CPR by Dr. Arden when attempting to provoke the aliens in Asylum, and as a Franken-Boyfriend in Coven. That could spell doom for this season's Jimmy, who's just an episode away from a motorcycle accident or getting sweet-talked by a disingenuous Maggie into getting his hands chopped off.