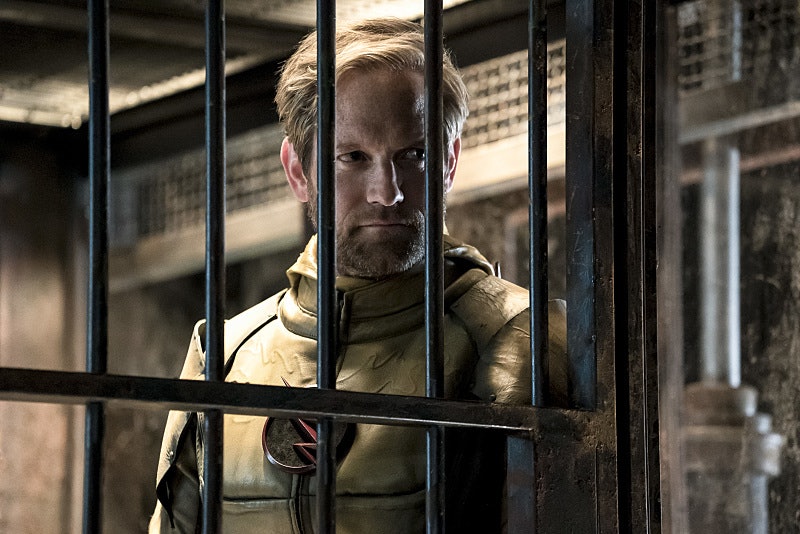 I hope you guys ate your Wheaties, because the superhero-verse on The CW is going to be more robust and complicated this year than ever before. It'll take all your superpowers to keep up. The Flash, Arrow, and DC's Legends Of Tomorrow will be back, of course. And for its sophomore season, Supergirl makes the leap over from CBS in a single bound. December will bring an unprecendented four- way crossover event, but before it arrives, each series will so some solo storytelling. The Flash, in particular, has a lot to catch fans up on. The Season 3 premiere will throw the audience into the alternate timeline that Barry created in the finale when he saved his mother Nora from the Reverse-Flash. That crafty guy is back in his yellow suit in promo pictures for the premiere. Identities change as quickly as Barry sprints to Jitters on this show, so it's nothing to be ashamed of if you need a refresher. Who is the Reverse-Flash in the Season 3 premiere? It's Eobard Thawne, the man his ancestor Eddie erased in the Season 1 finale.

So many things (all the things?) have occurred in all versions of Central City since the Reverse-Flash first stalked Barry Allen. Long story short, Eobard Thawne went back in time to kill Barry Allen, the child who would become his nemesis. Time travel stuff intervened; Barry from the future had also traveled back and saved himself, so Reverse-Flash killed Barry's mother instead. Reverse-Flash lost his link to the Speed Force when he tried to go back to his original time. He took over the body and the identity of brilliant physicist Harrison Wells to get close to Barry; figure out how to get his powers back; and then kill him. His plans were thwarted when Iris's boyfriend Eddie sacrificed himself to erase the other Thawne from the present.

But time is not always on the side of the good guys. A younger version of Thawne showed back up again in Season 2. How could it be? Because this Reverse-Flash hadn't traveled back yet with the express purpose of killing Barry. Thus, the events leading to Eddie's act were not yet set in motion. This was more of a fact-finding mission. Just because Eddie wiped out the Reverse-Flash who was menacing his friends at the time doesn't mean he lifted him out of history. There are still remnants of him existing through time.

Of course, he was there waiting again when Barry returned to the day his mother died in the Season 2 finale. This time, Barry did save his mother from the Reverse-Flash, creating the Flashpoint paradox that's adapted from a very popular Flash comics arc. In this promo for the premiere, Eobard Thawne is locked up for that attempted murder and he's got a warning for Barry.

In Flashpoint land, Barry is loving not only that his mother is alive, but that he's no longer the only speedster protecting the city. Wally West is a full-fledged Kid Flash in this timeline. But Thawne knows more about these time quirks than Barry does. Barry will begin to forget his previous life, Reverse-Flash warns. And that could ripple negatively through the lives of his family and friends.

Why does Reverse-Flash care enough to warn Barry Allen about the peril of time travel? Check out The Flash season premiere on Tuesday night to find out.