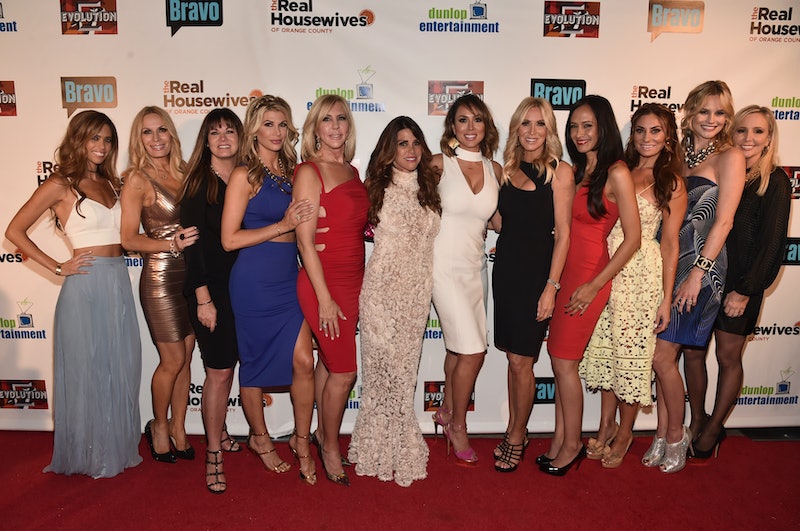 With more seasons of The Real Housewives than I even know how to count, the number of horrible dinner parties, nightmarish overseas trips, and dramatic fights continues to climb. But perhaps the most troubling thing to come out of the Real Housewives franchise is the ever-increasing number of breakups between the cast members and their significant others. It seems to be a problem across cities and states, because no matter where these Housewives call home, there are a ton of dramatic breakups in Real Housewives history.

I’m not sure if it’s the reality that the cast members get smacked with when they see their relationships play out on television or if it's the type of couple that a reality show attracts, but it seems that every season of this show involves some sort of relationship drama, culminating in some sort of breakup. Barely a season goes by without someone getting divorced or someone having to say goodbye to a partner through a veil of tears. It's a tough show to be on while you're in the throes of love, that's for sure.

But even with all of that heartache floating around these women's lives, there were a number of breakups in the show's history that were particularly messy. Because of things that were said in the press or things that were revealed on the show, these Real Housewives splits were definitely some of the worst.

The breakup didn’t happen onscreen (because nothing between these two ever did), but when Zolciak announced that her on-again, off-again relationship with Big Poppa had ended, fans weren't at all surprised. After all, he was reportedly married throughout their relationship — not to mention the fact that Zolciak had already moved on with Atlanta Falcons player Kroy Biermann.

Even though she divorced the Count, Luann got to keep her Countess title. But when she later confessed in an episode of The Real Housewives of New York that they had had an open marriage that she had not been a fan of, it became clear the end of their relationship was more dramatic than what we saw.

After marriage, a baby, and their own spin-off series, this New York couple separated and went through one of the longest and messiest divorces in Real Housewives history. Even though the couple hasn't been clear on what exactly was the catalyst behind their split, their divorce dragged on for four years while they duked it out over their New York City apartment.

The uncomfortable end of this couple all played out on TV when Camille flew to New York to accompany Kelsey to the Tony Awards. Later, it came out that he had been having an affair with a woman the entire time. Grammer later spoke about their marriage in an interview with Oprah Winfrey, saying, "I stayed because I’m a stubborn cuss. I was not in it, or happy in it for a long time. It was pretty much over as soon as it began." In the same interview, he said he made appearances on RHOBH because he felt like he "owed something" to her.

The tension between these two was palpable every time they were onscreen together. So, when they later announced their divorce, it came as a shock to no one. But that didn't stop Vicki from frequently lamenting her lost marriage, including in a recent interview where she said she wished her divorce had never happened.

These two were one of the few couples who kept their trouble relatively quiet, which made it all the more dramatic when, in late 2015, they announced their separation and impending divorce. When Hadid later spoke out about the breakup, saying that she wasn't the same person that she was when they got married (referring, of course, to her Lyme disease diagnosis), the world was shocked that their split may have been for health reasons.

Recent fans of the Atlanta Housewives probably don’t remember a time when Greg wasn’t NeNe’s number one boo, but the couple actually divorced while filming the series, and then later reconciled and remarried. During their time apart, money matters seemed to be to blame; there were a couple of shady scenes shot between the two of them for the show in which Greg seemed unwilling to open up to NeNe. It's still not totally clear what happened between them, but their split was sudden and shocking to everyone who loved them as a couple.

It was no surprise when this couple that could never seem to stop picking at each other announced their divorce, but that didn’t stop the sparks from flying after Brandi Glanville announced a secret on the show that they wished to keep quiet. Soon after, the two announced their separation, with Maloof stepping out soon after with a much younger man.

This onscreen breakup was so painful to watch. As Moore continued to pursue Jackson and the future she wished to have with him, he made it more and more clear that she was not the kind of woman he wanted to settle down for. We don't know the real reasons Jackson had for not wanting to pursue Moore, but their love affair, uncomfortable coffee conversations, and eventual breakup made for some dramatic moments on the show.

After Nida was indicted on a number of fraud charges, their relationship crumbled in a very public way. But it wasn’t until after he had started serving his sentence in Connecticut that Parks officially filed paperwork to get their divorce started.

This very public couple got very private about their divorce when they separated after Williams’ first season on the show. But, soon after, Williams opened up about her side of things, claiming that Stewart had cheated on her. Stewart, for his part, spoke out against his ex-wife in his autobiography, Truth: The Kordell Stewart Story, saying, "I don’t talk to [Porsha]. I tried to reconcile the last five or six months of our relationship. I was madly in love with my ex-wife."

This might be the most dramatic breakup of all. When this Orange County couple split, it was literally on television. That scene in the limo where Judge declared she wanted a divorce will live on in Housewives infamy.

Even though they were super vocal about their love for each other, the two split when rumors came to the surface that Mario had been cheating on Ramona for some time. Later, in an interview with Andy Cohen, Ramona confirmed that not only were the rumors true, but that her husband had confessed to her his misdeeds. Mario, in the meantime, has not confirmed the rumors; instead, he has remained mum and out of the spotlight throughout the drama.

It hasn’t always been all sunshine and roses for these Housewives pairs, but somehow, they all manage to come back from even the most heartbreaking of breakups.