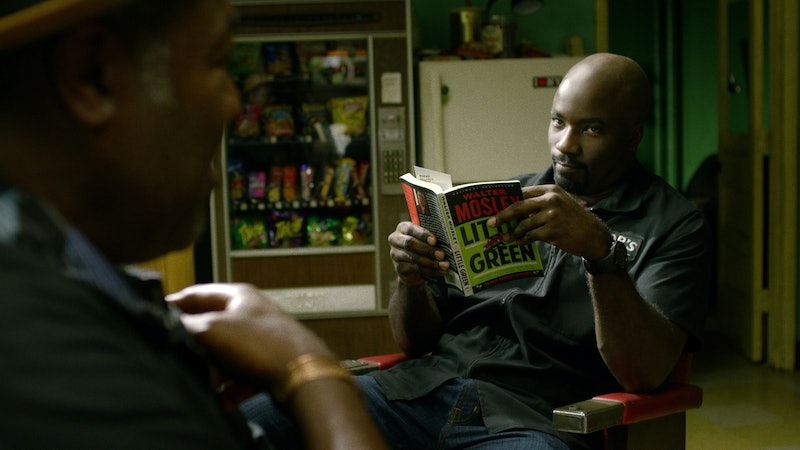 Marvel movies are known for their quips and needle drops in the soundtrack, but so far the Netflix entries in the MCU have been much darker. Matt Murdock and Jessica Jones just don't seem to like fun. However, those days are over, because the pop culture references on Luke Cage range from hilarious and poignant to downright campy.

The jokes on this show are so delightful — even quips like "there ain't no return policy, this ain't L. L. Bean" were delightful, and when characters make references to their own Marvel universe, it's pretty fun. I'm still not over the fact that Justin Hammer, the villain from Iron Man 2, is both a reference point and an associate for these characters. Plus, every time someone calls an Avenger "the green monster," "blonde dude with the hammer," or "flag waver," you've just got to laugh. It's always those three, too. Even in the MCU, nobody cares about Hawkeye.

I won't count history or sports references, but there were plenty of those as well that helped build the world. President Obama even got a shout out or two. The characters often discuss the books and authors that they're reading, from Walter Mosely to Chester Himes, Donald Goines, and Michael Connelly. I'm not even counting the fact that Method Man plays himself on the series. That said, here are the pop culture references that made me chuckle and help make Luke Cage as excellent as it is.

Pacino films like Scarface and The Godfather are also mentioned as reason why the actor is on the "free service" list at Pop's, but this was a deep cut.

Cottonmouth's photo is practically a character in the series.

Not only does he show up at Cottonmouth's club, like many noted musicians, but Misty and Scarfe discuss his music in one of their more bantery scenes.

Of all the things for Ron Cephas Jones' character to reference when describing Willis' Diamondback outfit. I did not expect this high fashion response.

When someone refers to violence as "Candyland sh*t," you know it's serious.

Not the movie, just the concept of the sequel being better than the original. Hilarious.

Mariah Dillard called people like Luke Cage and The Avengers "super freaks" a few times, but this sign at her rally takes the reference over the edge.

9. Back To The Future

A prop newspaper in one of the scenes includes references to the plot of Back To The Future.

Glad that Scarfe and Knight knows their Horton Hears A Who. Luke calls Pops The Cat In The Hat in the same episode.

This Seagate debate is classic. Even superheroes pit their favorites against each other in imaginary battles.

Too much. But also, raise your hand if you hear Angelica Schuyler's lyric from Hamilton every time someone mentions the Greek myth now.

Granted, this Friday reference has taken on a life of it's own in the past couple of years, but it's still a good reference.

I didn't know Shades had jokes. I thought he was all seductive glares.

Fish also calls Diamondback a "pimp stormtrooper" — and I think Diamondback's "I am your brother" was a little Vader-y as well.

Once Diamondback appears, the pop culture references (and the drama) turn up to eleven. Playing "Son of a Preacher Man" while giving a monologue about being the son of a preacher man was especially extra.

Another classic Diamondback reference, quoting the above scene while searching for Luke. He might as well be a character on Gilmore Girls.

He was corrupt, but I'm gonna miss Scarfe. Who's gonna throw Misty Knight for a loop with references like this?

I'm glad that Luke Cage characters answer "who's he going to call" with "Ghostbusters" every time, just like me. Hey, they managed to make a Ghostbusters reference in 2016 without making it about gender, too!

Mariah hangs the neo-expressionist artists' "Red Kings" in place of her cousin's Biggie photo in the final montage. Kings and crowns are a Basquiat motif, and he was known for social and political commentary, especially having achieved notoriety as a street artist. This is an interesting aesthetic statement. She's not Cornell, but she's not her grandmother and she's not the Mariah we first met either.

Obviously, I'm saving this Jay-Z, Beyoncé, and Gang Starr reference for last. There's so many layers and levels on this one, and whether they were intentional or not, I love it. There are more music references than I can keep track of — so this is not a complete list by any means. I guess it makes sense that a show set in Harlem, a cultural mecca, uses the language of pop culture references with more ease than its Hell's Kitchen sister shows. Maybe Luke Cage is just way more fun. Whatever the reason, its references like these that set Luke Cage apart, and make me even more exited to see more of him in the future.