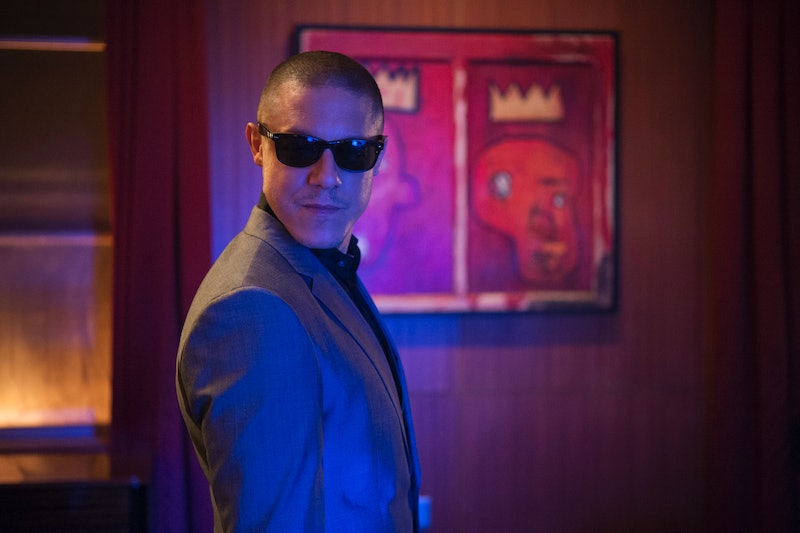 From a crime lord to a politician to a hitman with a personal agenda, the many villains of Luke Cage all have a bravado to them. Spoilers for Luke Cage Season 1 ahead. In fact, the villains of the Netflix series, which premiered on Sept. 30, are so prideful that their personal emotions often end up getting the best of them — even proving fatal for one of Luke's main antagonists. And then there's Shades. While everyone else is monologuing or planning a show-stopping entrance, he is constantly in the background and watching the events that he has set in motion unfold. And if you really pay attention, you'll realize that Shades is the mastermind of Luke Cage.

For a show with two main characters named Cottonmouth and Diamondback, it's ironic that the most snake-like villain goes by the name "Shades." Furthering the irony, it appears that the man who can't stop wearing sunglasses is the only one who can clearly see the bigger picture. Marvel's Head of Television Jeph Loeb stated during San Diego Comic-Con that Shades is "kind of the Littlefinger of Luke Cage," and considering he makes it out of the season alive and unharmed, he may also be the best villain in the series right now. Here are a reasons why Shades was the ultimate mastermind of Luke Cage.

Shades Knew Luke Cage Before Anyone Else

Aside from Diamondback, who put Luke in prison in the first place, Shades was one of the first people to recognize Luke Cage's strength. It's not entirely clear what Shades was doing in Seagate prison, but it is known that he was working for the same person that put Luke there, which suggests that Shades may be far more interested in Luke than anyone suspects.

He Doesn't Even Blink When One Of His Bosses Dies

It wasn't even a minute after his boss Cottonmouth hit the ground that Shades started planning his next move. After getting definitive proof that Mariah is more ruthless than she appears, he quickly moves in and offers to work with her to follow in Cottonmouth's footsteps. After spending most of the beginning of the season in the background, this is the point where Shades really steps up.

He Knows His Rights

Some villains have a tendency to say more than they should when in police custody — just look at what happened when Misty finally got Mariah in the interrogation room. Shades, however, knows there is only one word that needs to be said — "Lawyer."

He Set His Pride Aside To Work With his Enemy

Once Shades realized what viewers knew all along — that Diamondback is absolutely insane — he had the good foresight to align himself with Luke Cage. While their previous conflict has soured any true collaboration, Shades being willing to set aside his pride to work with an enemy shows that he isn't just sneaky, he's also smart.

He Covered Up Mariah's Loose Ends

For a while, it looked like none of the villains of the first season of Luke Cage were going to make it out alive. Cottonmouth bit the dust halfway through, Diamondback had gotten beaten to a pulp, and Mariah is arrested for the murder of her cousin. However, ever the sneak, Shades managed to track down the only witness to Mariah's crime and kill her. It was brutal and utterly devastating for our heroes, but proved that Shades is willing to whatever it takes.

He Has No Problem Letting Someone Else Take The Lead

Shades and Mariah's kiss at the end of Season 1 may have been surprising, but it's no wonder that Shades wants to associate himself with such a powerful figure. They work well together, and he is happy to stand back and watch the world around him rather than take an active role. Cottonmouth and Diamondback were both separately intimidating, but that's nothing compared to the combined forces of Shades and Mariah.

Shades may not be the flashiest or most stylish villain in Marvel's Luke Cage , but that doesn't do much when you're supposed to be running a hidden crime ring. Shades spent the first season surprising other characters and the viewers with the lengths he would go to ensure that he was associated with those in power. It may be good to be king, but in a world where everyone is trying to kill the king, it might just be smarter to be an advisor. Shades understands that, which is why he'll probably be alive and scheming for a long time.