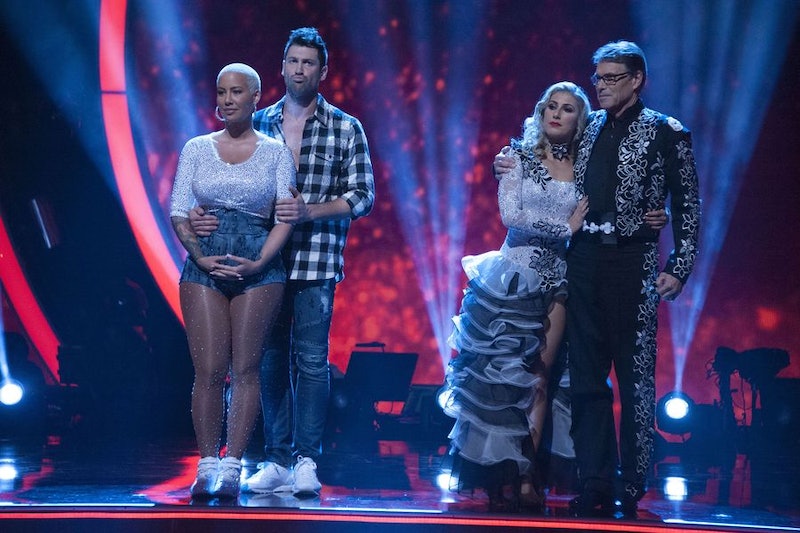 There was heat on and off the dance floor during Amber Rose's routine on Dancing with the Stars because of Rose previously stating after the Sept. 27 episode that she felt judge Julianne Hough had body shamed her. According to People, Rose had overheard Hough saying that Rose's salsa with partner Maksim Chmerkovskiy made her feel uncomfortable and Rose interpreted that comment as Hough criticizing her body. As People reported, Hough responded that she was only judging the dance — not Rose's body — and the women were able to discuss the conflict during the Oct. 3 episode.

Rose and Maks danced an Argentine tango that was inspired by Cirque du Soleil's burlesque show Zumanity (the entire episode was Cirque du Soleil themed). Maks decided rather than hold back, he wanted Rose to feel comfortable in her body and the pair embraced the seductive nature of Zumanity and it worked since Rose received praise for all three judges and landed a score of 24 with eights across the board.

But before she received her score, Tom Bergeron facilitated a discussion between Rose and Hough in front of the audience about the previous week's issue. Rose started off by saying, "When you said that [you felt uncomfortable], I felt very embarrassed and I felt like you weren't talking about my dance, but if I misunderstood, then I apologize." She then proceeded that doesn't want to argue or "make things weird" and that she just wants to move forward with positive energy.

While standing up and clapping, Hough could be heard saying, "Thank you" to Rose's statement and the judge then said how she loves that dance is a platform for all people to express themselves, regardless of age, height, body shape, ethnicity, or sexual orientation. She followed with a more direct response to Rose's concern by saying, "As a judge on this show, I'm here to solely judge you and everyone else in this competition on only the dancing, so I want you to know that."

As I mentioned, Rose's dance not only had a happy ending with her score, but also because these women showed how to respectfully resolve a misunderstanding. At the end of her statement, Rose had said, "Let's just have fun!" And, now that Rose and Hough have talked it out, that's exactly what they'll be doing on Dancing with the Stars from now on.