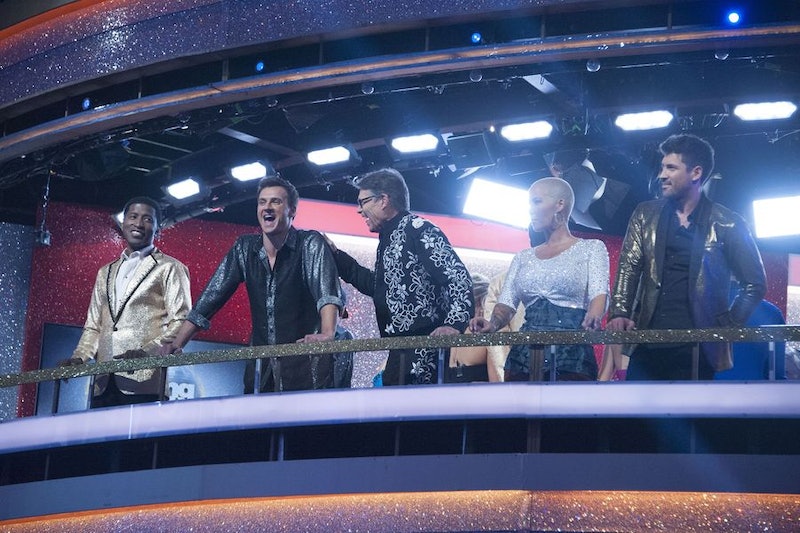 Judge Bruno Tonioli understandably misinterpreted some cheering from the crowd during his assessment of Ryan Lochte's performance on Dancing with the Stars on the Oct. 3 episode. After the controversial Olympic swimmer danced a Viennese waltz inspired by the Cirque du Soleil show O with his partner Cheryl Burke, Bruno was giving his usual enthusiastic feedback when two girls were heard yelling something from the audience. Bruno told Lochte to ignore the interruptors, presumably thinking they were saying something negative, but the almighty Twitter has revealed that actually, the people in the audience were most likely fans of Lochte and showing their support.

After two protestors rushed Lochte during the season premiere of Dancing with the Stars, I also assumed that the two people yelling during Bruno's commentary were saying something negative about Lochte. While I couldn't make it out, it almost sounded like something about "cheaters" to me, which really didn't make too much sense. Turns out, like Bruno, I was completely reading into it since apparently the two girls were yelling, "Go Gators!" Entertainment Weekly's Lynette Rice tweeted that People magazine's Patrick Gomez was in the Dancing with the Stars audience and that the two girls were cheering for the swimmer in a positive manner and referring Lochte's alma mater, the University of Florida, whose mascot is none other than a gator. Ah, it all makes sense now!

Others on Twitter took Bruno's cue and also thought that Lochte was being heckled, but this around, he was getting audience support. While his claims that he was robbed at gunpoint during the Rio Olympics will probably continue to follow him as long as he's on Dancing with the Stars, the yelling heard during the Oct. 3 episode were just some old-fashioned university cheers.