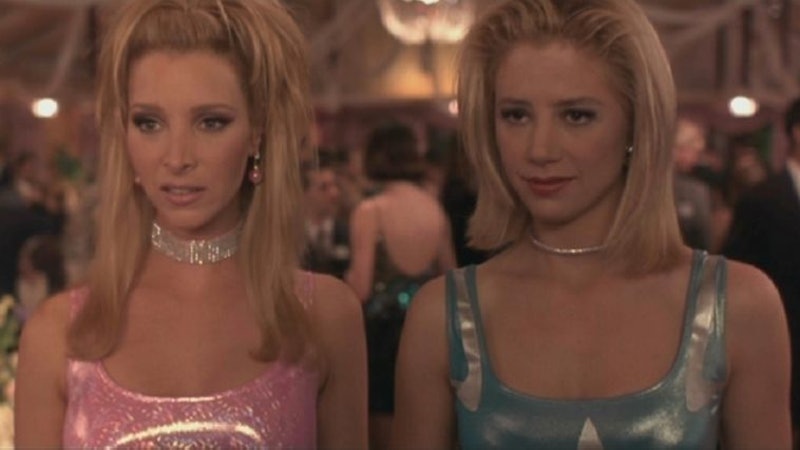 Things change, and even things that seems so simple, like school dances, were different in the '90s. There are many things about school dances that stay the same. Anticipation in the lead up. Social anxiety that's the horrible but inevitable part of being a teenager. Music. Boys standing on one side of the room and girls on the other until the last 30 minutes, then finally coming together to dance, realizing it's more fun that way, but also that you wasted the whole night doing it wrong. When I hear teens talking about their school dances now, I can grin with a familiar nostalgia, in the comfort that growing up is awkward and weird no matter when you do it.

But then some things are completely different now than they were in the '90s. For instance, technology in the '90s wasn't exactly convenient. Innocuous things like that can shape things that seem far removed — like a school dance, for instance. Think about not having a cell phone in high school, and how many high school kids have cell phones now. That's bound to have a serious impact on the way a social occasion plays out. Here are 11 ways school dances in the '90s are different from school dances now.

1. No One Was Texting, Tweeting, WhatsApp-ing, Or Communicating In Any Other Way Than Face-To-Face

Of course, there was the boy/girl room divide mentioned above. But also no one was sitting in a corner furiously texting. So even if you weren't necessarily talking to members of the opposite sex, you were at least engaging in the scene generally and the people around you.

In the '90s, we took point-and-shoot film loaded cameras to school dances. Our parents then took them to get printed out, and we'd take them to school to show them around before making elaborate bedroom wall collages out of them. There was no such thing as positing countless images to social media in the '90s.

3. Girls Wore Hundreds Of Tiny Little Butterfly Clips In Their Hair And It Was Hot, Damn It

Hair these days is generally pretty natural when it comes to style. Whether it's long or a lob, chic is generally effortless. Rather than have weird styles, these days it's cool to color your hair, but still to have it pretty wavy and free. But in the '90s, coiffed style was key. We'd put dozens of tiny butterflies in our gelled up-dos and we were proud, damn it.

Kylie Jenner has a kind of strangle hold on teen style at the moment. In the '90s there wasn't one person we emulated the way Kylie is emulated these days, so style was more fluid. Now it's clone wars.

5. Everyone In the '90s Just Wanted To Do Choreographed Dancing

6. Everything Used To Be About Body, Face And Hair Glitter, And How Much You Could Apply

Make up trends now involve contouring and strobing and baking and all sorts of weird words, but in the '90s, there was only one word you needed to know: glitter.

7. At Least Six Girls Had "The Rachel"

Six might be an understatement. But at your school dance in the '90s, there were loads of flat "Rachel" wannabe hair styles going around.

It's not just girls that had poor taste in the '90s. Boys who dress like Biebs now would have dressed like Nick Carter in the '90s. So that's a note to your future selves, about how you're going to feel about your current "look" in 15 years.

The "dark" character (think "dresses like The Craft") was the taboo one. Now black lipstick rules. So while cool was a bit more sugary in the '90s, and alternative cool was grunge, now all the signs of "uncool"— from dark lipstick to witchy lace and black hair — are the coolest.

Midriffs have their place now. But more Taylor Swift-ishly. High-waisted pants and skirts with cropped tops. No belly buttons. Back in the '90s, your midriff was the mandatory baring of everything from the bone that skimmed the top of your pubes to just under your boobs.

11. In the '90s You Were Basically Trying To Live Your School Dance Like A Scene In A Teen Film

The '90s were rife with teen films about school dances, or culminating in a school dance. So in your head, your school dance in the '90s better end like the perfect teen film, or else you didn't consider yourself to be doing it right.