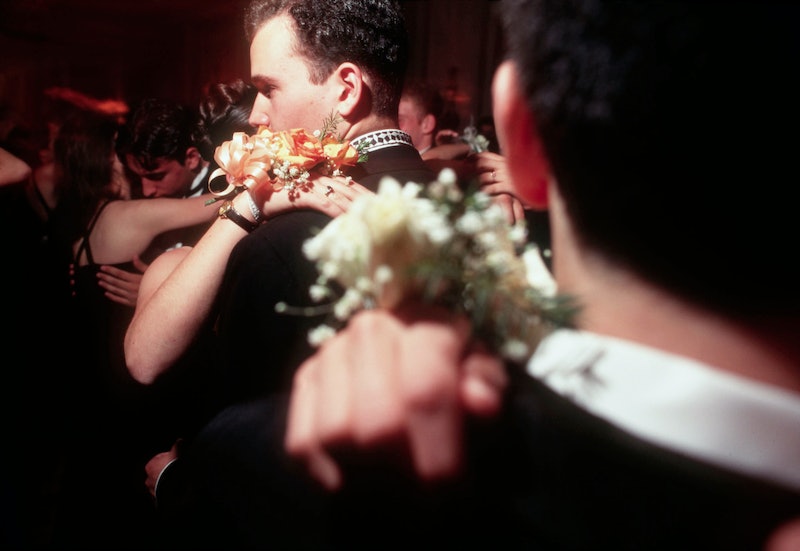 In the '90s, Friday nights signaled one of two exciting prospects: a home football game, or a school dance. Sometimes, the two would even coincide for the best time you never knew you could have in a cafeteria shoddily decorated with streamers. And while we all have our own special memories of those magical nights that smelled faintly of leftover pizza and French fries from lunch, there are certain things every '90s kid did at a school dance. Hint: Dancing was only one of them.

Here's the scene: It's Friday night, and naturally you three-way called your BFFs beforehand to discuss your outfits — unless this was a "special occasion" dance, like Homecoming, you didn't need a formal dress. Doubling up on denim and rocking a baby backpack were not uncommon elements of attire. If the dance was scheduled to take place after a home football game, you'd naturally head to the school gym during the second half to get ready with your girl posse beneath the unflattering fluorescent glow of girls' locker room lighting. Then, after much fussing over the perfect shade of super edgy eyeshadow, you and your posse would make the short sojourn to the cafeteria-turned-dance-hall to scout out the perfect corner to claim as your own. There, with the heady mix of B.O., CK One, and stale lunch wafting in the air, the DJ would cue the music — and the dance was a go.

So two-step down memory lane with me as we take a look back at some of the things '90s kids did once the school dance kicked off.

1. Avoid The People You Actually Wanted To Dance With

Ah, yes, who could forget those awkward first few songs when no one had the courage to cross enemy lines yet and actually ask someone to dance? This portion of the night was spent huddled in a corner with your best pals, shuffling in place to the music and pretending not to notice the hotties across the room.

It wasn't until much later that '90s kids realized this dance consisting of 16 steps you repeated over and over again was pretty darn silly. Still, 'twas a staple at every single school dance during the decade, making it so wrong it was right. (We're just going to pretend the whole "Cotton-Eyed Joe" craze didn't happen, 'mkay?)

3. Break Out A Signature Routine

Sure, everyone and their sister could do the Macarena — but bonus cool points were awarded (or at least we told ourselves they were) to those of us who memorized dance routines no one else knew. But oh the disappointment went your posse back out at the last minute, leaving you to enact the choreography to Britney Spears' "Baby One More Time" all by yourself.

'Cause you could never go wrong with body glitter. In fact, you were so bedazzled in body glitter by the end of the night, it was entirely possible that at some point, the crowd might start orbiting around you as though you were a human disco ball.

Please do cue up any of the most popular songs from Usher's My Way album, or how about Freak Nasty's "Da Dip" — the latter of which has lyrics which are enough to make me blush nowadays, never mind the fact we literally all lined up and let boys put their hands up on our hips as "I dip, you dip, we dip"-ed the night away.

Oh, shoot! When someone started breaking it down, that could only mean one thing: It was time to form a dance circle. The hitch here was that there was never just one dance circle. Each clique basically formed their own, while other kids continued to line the perimeter of the room drinking punch and hating the establishment. Fun times.

7. Teach Someone To Dance (Or Be Taught)

If you were lucky and/or had a bit of coordination, you were the teacher. But if, like me, you lacked a certain level of rhythm, you'd enlist your far more coordinated friends to teach you their moves, all the while hoping some of their rhythm might rub off on you.

Could there be any more time honored tradition at a '90s school dance than sneaking off? Whether it was to play Spin the Bottle, tinker with the gym equipment, or just make out with your GF or BF under the bleachers, you felt like such a badass when you reemerged at the dance as though you never missed a beat.

9. Save The Last Dance For Your Crush

After successfully spending 94 percent of the night avoiding your crush like the plague — unless you were already coupled up, of course, in which case you spent 94 percent of the night being pried apart by chaperones — the time had come to summon up your courage. So, as the DJ ceremoniously announced the last dance, you and your sweaty palms made your way to the dreamboat whose name you'd been doodling on your notebook all semester. Then you proceeded to spend the next three-and-half minutes floating on air to All-4-One's "I Swear."

More like this
The 'Kenan & Kel' Reunion On 'SNL' Took A Dramatic Turn, Thanks To Keke Palmer
By Brad Witter
The First Trailer For 'That '90s Show' Includes So Many Nods To The Original Series
By Jack Irvin, Alyssa Lapid and Grace Wehniainen
These Are The 3 Most Mellow Zodiac Signs
By Kristine Fellizar
20 Christmas Movie Quotes That'll Get You In The Holiday Spirit
By Alexis Morillo
Get Even More From Bustle — Sign Up For The Newsletter