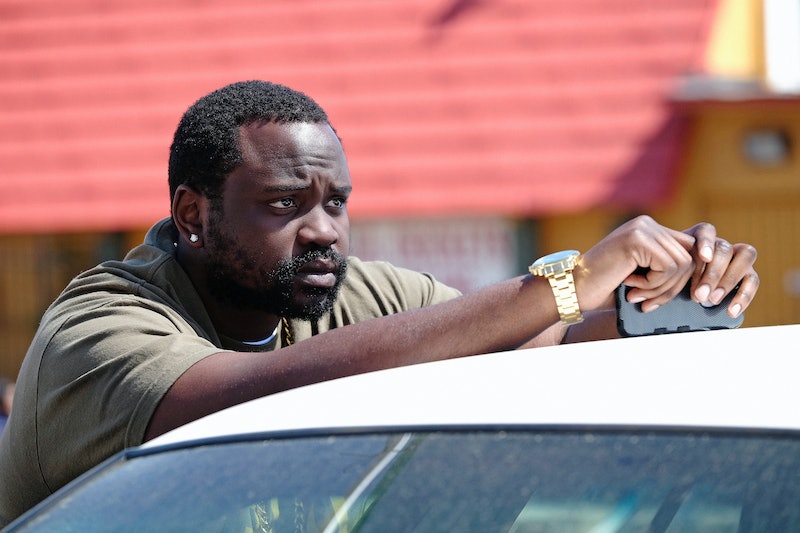 Atlanta is only halfway through its first season, but its impact on the current landscape of television and culture in general is already apparent. Brian Tyree Henry plays Alfred "Paper Boi" Miles on Atlanta — a small-time drug dealer developing local celebrity as a rapper — and tells Bustle in an interview that the show fortuitously came at the perfect time. Creator Donald Glover had been working on developing a TV project since he left Community in 2012; Atlanta premiered in September 2016 into a world where the Black Lives Matter movement is at the forefront of the American cultural conversation and rarely a week goes by when a black individual killed in a police altercation doesn't become a trending hashtag. "I’m really grateful that [Atlanta] happened now instead of four years ago when [Glover] started," Henry says. "Because what’s so great and also sad is that the way that the world is going, we will have storylines for days."

It's not that Henry thinks that race wasn't an issue in America four years ago, but he believes that a show with an all-black writing staff and drive to present its stories and sensibilities with "no room for fear" has shown up on the scene to "start a conversation" at a critical juncture. He also says that Atlanta is joining a fraternity of truth-telling art. "I feel like what’s happening now in television that we’re not afraid to talk about the ridiculousness of what it is to walk in this world as Millennials or walk in this world with race being the way it is or to walk in this world just as..." Henry pauses to think. "People are just stupid lately. It’s always been there, it’s just the accessibility to see it and to hear it is so prevalent now. It’s so in your face."

Henry hails from Washington, D.C., but spent his undergraduate years at Morehouse College, a historically black college in Atlanta before moving on to Yale to get his MFA in Drama. "Atlanta the city was very instrumental in creating the person who I am today," Henry says. "The moment that I land there, I’m at home." The actor says he didn't even have to open the script before the project started speaking to him. "All I saw was "Atlanta" the word, and I was like, 'What? Oh, cool. Peak game. Let’s do it,'" he remembers. "And I read the first few pages and saw Alfred and was like, “I know who this dude is. Most of my friends are Alfred. My cousins are Alfred."

And Henry, who has an lengthy theater resume in addition to his film and TV work, doesn't take this instance of identification lightly. "You can see this poster with three black men and think, 'That’s not for me,'" he says. "Whereas I go, 'There’s a poster of three black men: awesome.'" Henry compares the representation that Atlanta supplies for him and those "Alfreds" in his life to another comedy that's generated quite a bit of buzz in its time. "I remember when the show Broad City came around," Henry says. "Like, thank you, God, finally. These 20-year-old girls, they suck at living in this city but they are friends and they’re not without their imperfections. Why is that something that we should be afraid of? I think it’s revolutionary, honestly, to see that we can make fun of these things and know that there’s someone out there who’s like, finally, someone who’s reflecting my life."

Just like Broad City has drawn an audience that extends past the age, gender, and geographic location of its main characters, Henry is confident that viewers of any demographic can relate to Atlanta. "Trust and believe that we all have been in this place before," he says. "It’s just that sometimes the stakes are a little different."

So far, Atlanta has shown that it can sell familiar comedic plots that require its characters to navigate some discomfort or embarrassment, like Earn trying to take Van out to dinner without letting her know that he's almost broke. When I tell Henry the show sometimes reminds me of Seinfeld in that way, he confirms, "We hear that." But the series has not shied away from addressing systemic issues of unfairness either. Henry brings up the police station scene in the second episode of the show, where the police in the holding tank laugh at a mentally ill man instead of helping him and then attack him when he inevitably steps out of line. "What Atlanta is doing and what FX has provided is a platform for us to just call this sh*t out," he says. "To say, 'This is stupid. It’s just really dumb, and how are we going to change it unless we say something about it?'"

According to the actor, Atlanta won't be backing off of its mission to entertain, represent, and educate anytime soon. "There’s a revolution that’s coming," Henry declares. "It’s comin’! It’s comin’. And I’m really glad to be a part of it."