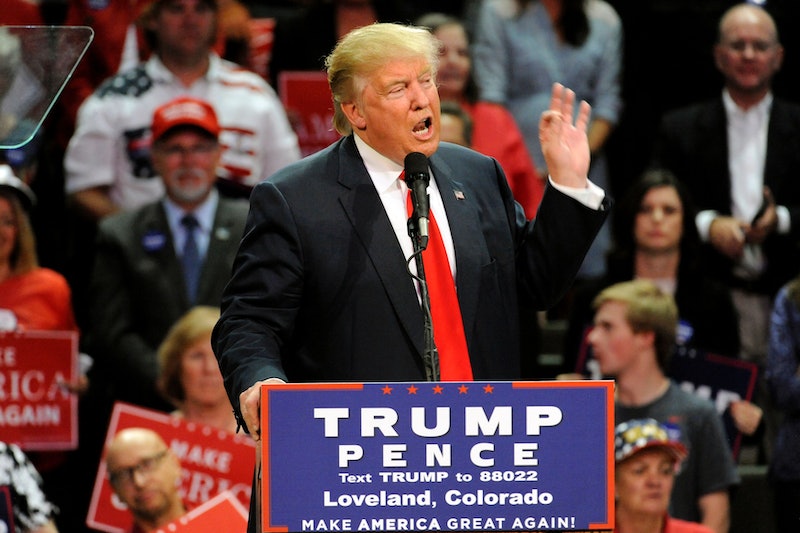 Over the weekend, The New York Times revealed that Donald Trump may not have paid taxes for 18 years, based on a loss of nearly $1 billion in 1995. Sound bad to you? Well, apparently voters need not worry — at least, not if they listen to Trump. Trump answered the tax accusations, but his response was just not true. He addressed the subject at a speech on Oct. 3 in Pueblo, Colorado, saying that he'd put his tax reduction schools to work for the country. "I'm working for you now — I'm not working for Trump," Trump argued, contradicting things he's said just weeks ago.

Here's the full quote from the campaign event: "The unfairness of the tax laws is unbelievable. It's something I've been talking about for a long time, despite, frankly, being a big beneficiary of the laws. But I'm working for you now. I'm not working for Trump."

But that's just wrong. Assuming Trump were president, he might still have his own best interest in mind — or at least, there's no way to prove he wouldn't. That's because Trump hasn't truly promised to sever ties with the Trump Organization if he were elected president. In September, after Newsweek pointed out a number of conflicts of interest, Trump said he would put the company in a blind trust. But in the same answer, he explained his children would run the company. That's far from blind, assuming he plans to keep in touch with them while in office.

So sorry, but Trump is not working for you, and he may never agree to (that would require releasing his taxes so we fully know his conflicts of interest). At worst, he could occasionally put the coffers of the Trump Organization above the interests of the United States. At best, you might wonder about it.

Besides that conflict of interest, the best thing for you the taxpayer is that rich people support the government. Federal programs are expensive, and if the working class pitches in, why do laws allow the rich to get off so easy? Problematic loopholes are the main answer, but Trump's advisers addressed how he did it. Here's what New Jersey Gov. Chris Christie said on Fox News Sunday: "There's no one who has shown more genius in their way to maneuver about the tax code as he rightfully used the laws to do that."

"Genius" must be the keyword shared among all Trump surrogates. Former NYC Mayor Rudy Giuliani said the same thing. "It shows what a genius he is. It shows he was able to preserve his enterprise, and then he was able to build it," he said on CNN's State of the Union. Even Trump echoed the thought at the campaign stop: "Honestly, I have brilliantly used those laws."

So do you really want someone who lauds a rich businessman for paying less in taxes (even if it's himself) to take the job of collecting more taxes from the rich? That just doesn't make sense, and Trump has made it very clear his goal would be to lower taxes on the upper class more generally — "a windfall for the rich," Robert Frank of CNBC called it.

So Trump may claim this week that he's working for you, but I sure wouldn't believe it.