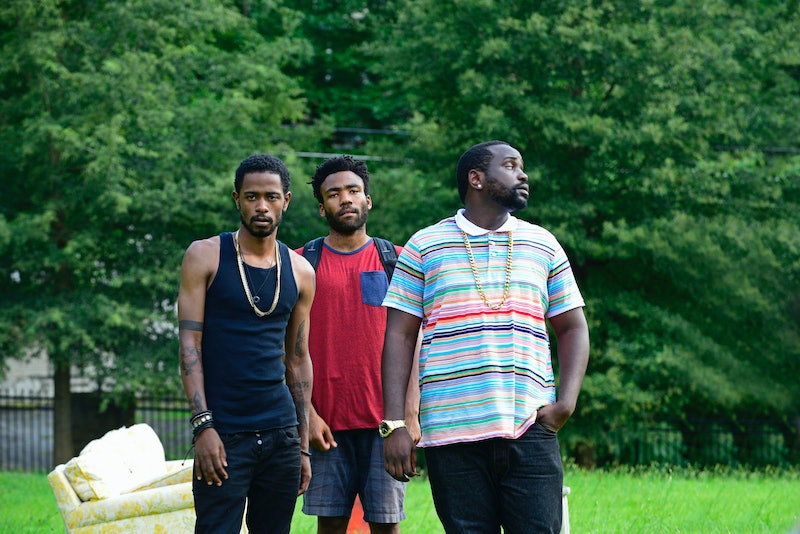 When he arrives at the Bustle offices in New York, Atlanta actor Brian Tyree Henry is wearing an eclectic selection of enamel lapel pins from his curated collection. ("I'm a pin guy.") One of them would catch the eye of any fan of the FX comedy. "I have Donald’s pin on my heart, 'cause I love this man," Henry says, pointing to one bearing the likeness of the show's creator Donald Glover. Henry is much more effusive about his friends and quicker to a smile than his Atlanta character, Alfred "Paper Boi" Miles, local rap celebrity and cousin to Glover's Earn. But in an interview with Bustle, Henry confirms that there's a lot of emotion swimming around underneath Alfred's sardonic surface. "I love his brutal honesty and his sensitivity and his heart," the actor says of his character. "If he loves you, he loves you."

If that love isn't always apparent, it's because Alfred tends to get bogged down in the small stuff. "He's so damn petty," Henry laughs. "He's just so petty. And the thing is, he didn’t ask for any of this. He didn’t ask to be known as a rap star. He just did a song that he thought was cool." When Earn saw the success of "Paper Boi" as an opportunity to link up with his cousin as a manager and build some mutual success, Henry says it "lit a fire" under Alfred. But what will it take for Paper Boi to blow up for real? "I think we all need guidance," the actor answers.

"I feel like Alfred is that guy that everybody has," Henry continues. "We have that kind of friend who's sometimes temperamental but laughs at everything and is very knowledgeable and could be labeled this way, but is actually this way..." Alfred jumped off of the page for Henry as soon as he saw the script for this exact reason. When he talks about the reflections of Alfred that he sees in his own life, Henry references unbreakable friendships that provide a necessary home base.

"Sometimes we’re all we have," he says. "And we can find a way to move through this crazy world together; because, at the end of the day, we are still looked at from other sides of the world the same." Earn, Alfred, and Darius (Keith Stanfield) may see their own differences clearly, and yet, as three black men from Atlanta, they're automatically categorized together by outsiders.

Henry has a theory about friendships, by the way. The actor was raised in a house full of women: his mother and four older sisters. So he's spent his life observing female relationships. "And I always see how they break out into fours or twos," Henry says. "And I’m like, 'What is that about?' That’s because homegirls ride for each other. They ride for each other, and there is nothing you can say that's gonna break that bond."

Meanwhile, the friendship group of Atlanta supports Henry's hypothesis about male social groups. "What I discovered about us is that the pyramid is the strongest shape in nature," he says, forming a pyramid with his hands. "There’s no weak side, and they’re all different, but they’re all part of the same structure. I like that trinity and trifecta we created with these three guys."

Atlanta is digging into hot button issues like police brutality and transphobia already, but Henry finds its exploration of male friendship just as necessary. "That’s what I’m loving about television now," he says. "These friendships, these real friendships." The actor confirms that those bonds are being developed off-screen as well. Even as early as his audition, Henry was clicking with his co-stars. Of course, he first had to locate his chill about meeting one of his own favorite rap artists: Glover, aka Childish Gambino. "I go in, and Donald’s there," Henry remembers. "And I tried so much not to go, 'You know you’re Gambino, right?'"

As Henry describes it, the Atlanta set is a hotbed of mutual admiration where personal expression is welcome. "I'd wake up every morning ready to go to work," Henry says. "I’d bring my music. The things that we love are shown in the show." Even for an actor with a body of work as varied as Henry's (the original Broadway cast of Book Of Mormon, Boardwalk Empire, and so on), this is a rare environment that he's not taking for granted. "It’s about creating a community of people who you can come and play with," Henry says. "And I hope to be doing that for a very long time."