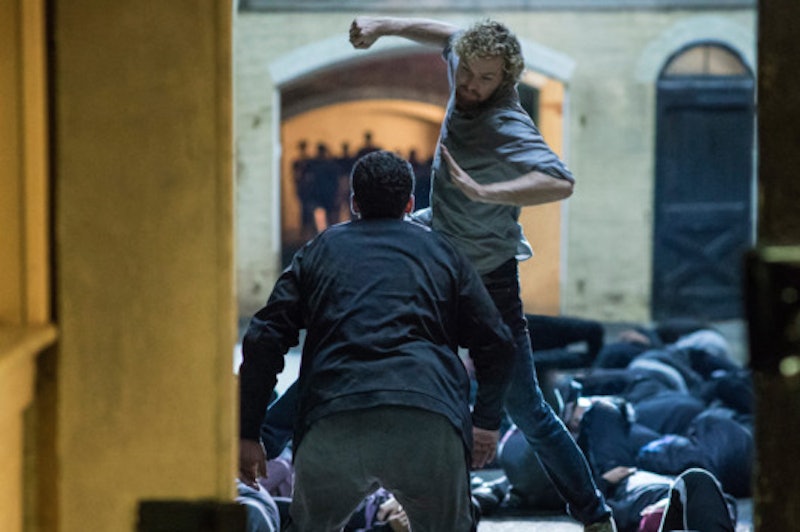 Well, well, well. What do we have here? A premiere date for Iron Fist, Netflix and Marvel's upcoming installment? On Tuesday, Netflix announced that Iron Fist will hit (get it?) the streaming service on March 17, 2017. If you've already finished Luke Cage, good news. Now, instead of just staring at your blank screen, you can mark the Iron Fist premiere date in your calendar and twiddle your thumbs until March of next year.

The latest in Netflix's Defender series follows Danny Rand (played by Game of Thrones' Finn Jones). Danny is a rich kid from New York, who obtains magical powers in the K’un Lun mountains — a range of real mountains imbued with their own mythology. After the mountains and the magic, he returns to New York with an iron fist (read: he fights bad guys) and seeks to avenge his father's death. It's good to see that the familiar deceased parent superhero trope is still alive and well, no irony intended.

To put it more simply, according to Netflix's YouTube channel, when "a long-destined enemy rises in New York, this living weapon is forced to choose between his family’s legacy and his duties as the Iron Fist." A classic superhero conundrum.

Danny's character was created by Roy Thomas and Gil Kane in the 1970s, back when martial arts movies were thriving. Though it wasn't questioned during its original comic production, the Netflix adaptation has already been put under the spotlight for how it will treat Danny's origin story. In 2014, an online movement urged Netflix to cast an Asian-American as Danny Rand. Sure, Danny looks just like Jones in the original books — white, blonde — but his story does appropriate qualities of Asian mysticism. Casting an Asian-American lead could have helped the show navigate the perils of its source material's own Orientalism, but how the show will handle cultural aspects to the story is still up in the air.

The trailer released in July of this year gives us a glimpse into the mythology of Iron Fist, and it looks amazing so far.

Rounding out the Iron Fist cast, we have: Jessica Henwick (Game of Thrones), David Wenham (Top of the Lake), Jessica Stroup (90210), Tom Pelphrey (Banshee). Carrie-Anne Moss will reprise her role as Jeri Hogarth from Jessica Jones. Now that the gang's (almost) all here, it's only fair to ask: When does The Defenders come out again?