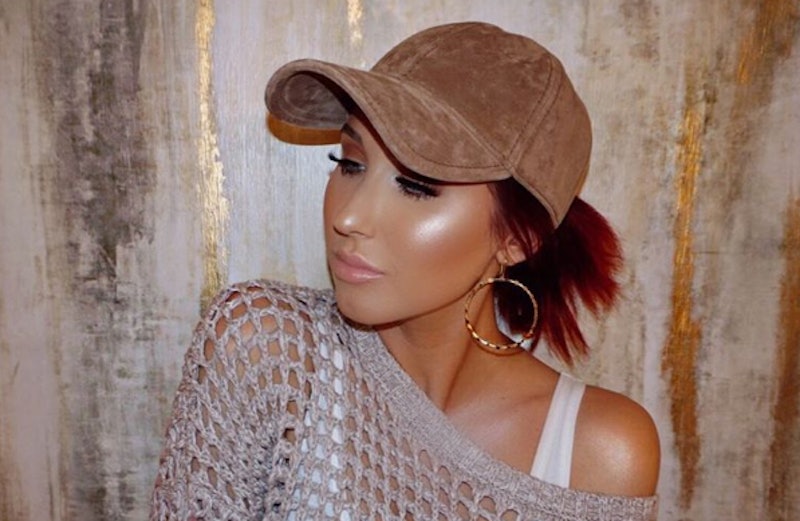 The queen of highlight is back at it, my friends. After creating her own shade and then an entire palette with BECCA Cosmetics, Jaclyn Hill just found a new perfect highlighter. It's probably not what your expecting either. She actually used a super affordable eyeshadow palette to get her glow, and Hillsters are freaking out. Believe it or not, this could be her best tip since she released Champagne Pop.

When Hill uploads a photo to social media, the world notices. After she posted a picture with her highlight as the star of the show, her fans were dying to know what she was wearing. At first she said on Snapchat that she wouldn't tell people until her latest video went live, but thankfully she changed her mind. It turns out that Hill was wearing a Morphe Eyeshadow Palette on her cheeks in the photo. *Cue freakout.*

That's right! According to her Snapchat, she was wearing a combination of Morphe's 35E Palette as highlighter. It's no shocking revelation that eyeshadows can be used on the face as well. The surprise is that looking at the palette, you wouldn't think it could bring this level of shine. Don't just take my word for it though, see for yourself.

According to Hill's Snapchat, she uses a combination of the entire top row and four shades from the bottom to get this look. Basically, she's a mad scientist of makeup and we should all follow in her footsteps. Just look at the gorgeous swatch of all the colors all mixed together.

The best part is that this palette is completely affordable. The 35E Eyeshadow Palette is only $22.99 on Morphe's website. You can get another 10 percent off that if you use the code "JACATTACK" too.

Hillsters are freaking out over the new highlighter technique. I'd go over to the Morphe site and get this palette while it's still in stock, because it definitely won't be for long. Here's what people have to say about the new makeup tip.

This is not an exaggeration.

What are you waiting for? Get to shopping!

Welcome to a new era of cheek shine.

I'm not sure that's actually possibly.

We have another genius!

To put it simply.

Because when Hill says it's good, you better believe the makeup world notices.