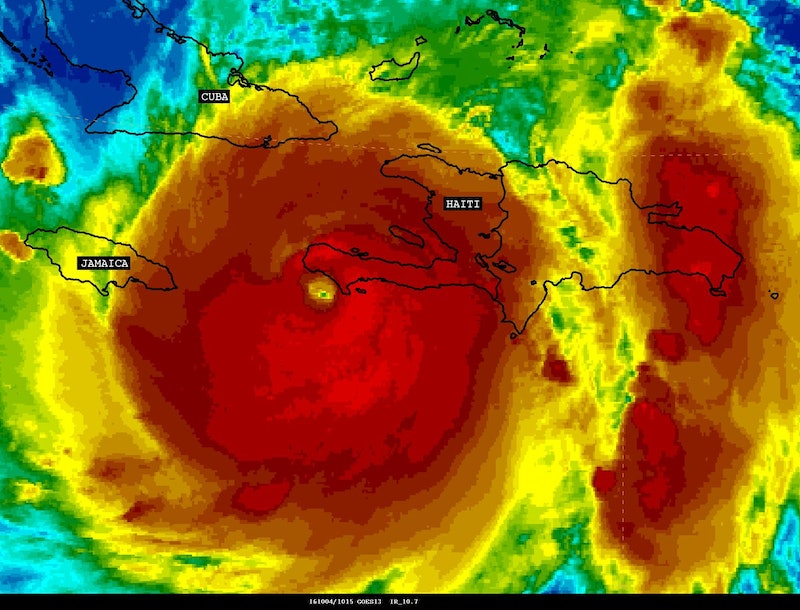 Now a Category 4 storm, Hurricane Matthew is said to be "the most powerful Atlantic storm in almost a decade." The hurricane made landfall in the Tiburon Peninsula of Haiti early Tuesday morning. While the overall magnitude of the damage has yet to be determined, there have already been at least three fatalities, and the U.S. National Hurricane Center has described the situation in Haiti such that the region's residents are "getting everything a major hurricane can throw at them." Not since Hurricane Leo’s 1964 arrival in Haiti has the country seen a storm as strong as Matthew, and these seven maps of the hurricane show its widespread damage.

There are currently a few conflicting reports of what those living on the East Coast can expect, with some forecasts predicting notable flooding and extremely forceful winds, while other experts predict the storm to significantly weaken by the time it makes its way up to the United States. Nonetheless, the state of Florida has issued a hurricane watch, which will likely happen in Georgia, South Carolina, North Carolina, and other East Coast states as well in the coming days.

Until its exact locations are known, here are seven maps that show where Hurricane Matthew has hit and where it is expected to go.

The Eye Of The Storm

With winds currently estimated to be at around 140 mph, an approximate 20 inches of rain expected to fill the country's lower elevations, and over 55,000 people living in tents, there is a lot of concern for the human cost this hurricane may bring.

President Jocelerme Privert has asked that those living in unsafe housing seek protection at any of the 1,300 emergency shelters that have been put together as of the storm's arrival, which combined should be able to hold up to 340,000 people. Despite Privert's pleas and warnings, however, only an estimated 2,000 people have mobilized to these shelters.

This five-day forecast by the National Hurricane Center predicts that Matthew's most intense effects will be felt in the Caribbean, specifically in Haiti, Cuba, Jamaica, and the Bahamas. Florida is shown to be likely hit with "major hurricane" weather (categorized when winds exceed 110 mph) early Friday morning.

One of the biggest threats posed by Hurricane Matthew is, of course, flooding. The largest amounts of rainfall are expected in southern Haiti (up to 40 inches), the Bahamas (up to 15 inches), and Cuba (up to 20 inches).

So far, thousands of people have evacuated the coasts in these countries. In Jamaica, citizens have started to prepare by boarding up windows and rushing to grocery stores to stock up on food and water.

Possible Damage In The U.S.

When it comes to Matthew's possible impact in the United States, the above model shows the hurricane inching close the East Coast but continuing its course primarily offshore. This is a more comforting outlook than that of National Hurricane Center, which sees direct impact as more likely:

Regardless of whether the storm remains offshore or not, residents living on the coast from Florida to Canada are being encouraged to remain on high alert, as the probability of coastal erosion, flooding, and strong winds still pose risks to safety. Rainy days are also expected all along the coast this week.

As of right now, Hurricane Matthew is expected to continue for at least another week, and these maps show its far-reaching effects.