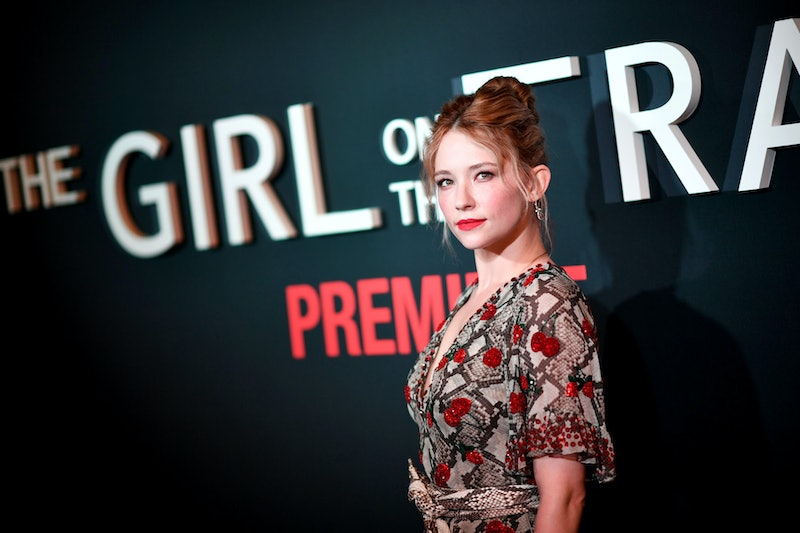 Think you have a hard time keeping spoilers from your friends who aren't as up on pop culture as you are? Imagine being the stars of The Girl on the Train, one of the most anticipated — and most secretive — movies this year. Based on the bestselling novel by Paula Hawkins, the thriller is shrouded in mystery, with every twist and turn (and there are many) unpredictable and highly entertaining. Readers of the book know what to expect from the movie, but those checking out the story for the first time in theaters will want to go in unspoiled — and for Girl on the Train stars Edgar Ramirez and Haley Bennett, who've had to keep the film's secrets hidden for ages, that comes with a lot of stress.

"We're focused on the experience of having gone through these characters more than telling [the secrets]," Ramirez, who plays Dr. Kamal Abdic in the film, says while speaking with Bustle during The Girl on the Train's New York junket.

And besides, neither actor wanted to be the ones responsible for ruining a story the filmmakers intended to keep private for as long as possible. Says Bennett, who plays Megan Hipwell, "I think we worked so hard in keeping the mystery... because there is such a shocking twist at the end and Tate had such a big responsibility to not unveil that twist."

But, she adds, "Of course you can pick up the book and read and figure out what happens... you can just get on the internet and find a Cliffnote, and figure out the mystery."

That may be true, but hopefully, most fans will keep themselves spoiler-free before heading into the theater. The Girl on the Train may be based on a book (one that, it seems, practically everyone out there has read by now) but that doesn't mean that the film is a carbon copy. Part of the fun of seeing this movie is, even as a book reader, not knowing exactly what's going to happen — so do yourself a favor and take a note from Ramirez and Bennett's secrecy by not ruining ruin it for yourself (or others) beforehand.