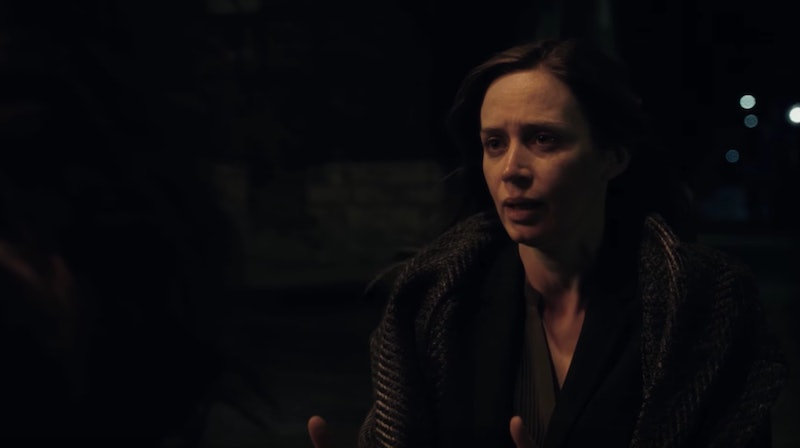 The Girl on the Train is barreling towards us (sorry, I couldn't resist), ready to take over the box office when it hits theaters. The thriller, based on the bestselling book by Paula Hawkins, stars Emily Blunt as Rachel, an alcoholic, recently-divorced woman whose unhinged mental state sees her semi-obsessively stalking her ex and his new wife and child. The Girl on the Train is written from three points of view: there's Rachel, the unreliable narrator, Anna, the woman who is now married to Rachel's ex, Tom, and Megan, a young married woman who Rachel liked to watch from the train on morning commute. It's unclear whether or not the film will follow this model, but, if it does change how the story is told, I hope these 13 Girl on the Train quotes make it into the movie.

The Girl on the Train is about many things, but a few major themes are the exploration of a woman's role in society and the nature of truth and memory. Rachel, Anna, and Megan all struggle to reconcile their selves with the roles they play — wife, ex-wife, mother. And they each have their own truths, their own memories and experiences that they believe to be real, or that they question. These 13 Girl on the Train quotes perfectly express those themes, and that's why they deserve to make it into the feature film.

Rachel recalls Tom saying this to her after they found out they couldn't have children. The idea of willing oneself into happiness is central to Rachel's journey — a cruel fantasy she can't achieve.

2. "Being the other woman is a huge turn-on, there's no point denying it: you're the one he can't help but betray his wife for, even though he loves her. That's just how irresistible you are."

It seems everyone in The Girl on the Train is the other woman at some point, and this quote might help explain why.

3. "I can't do this, I can't just be a wife. I don't understand how anyone does it — there is literally nothing to do but wait. Wait for a man to come home and love you. Either that or look around for something to distract you."

The role of the wife is central to The Girl on the Train, though it's not always happily ever after.

Talk about feeling inadequate. What's a woman to do when she feels inadequate in her relationship role?

Rachel explains her alcoholism perfectly and truthfully. It would be great to hear her be so introspective in the movie.

6. "He might be a very good liar, but I know when he's telling the truth. He doesn't fool me."

A perfect line for a film that's all about subjective truths and lies.

7. "What does it feel like, Anna, to live in my house, surrounded by the furniture I bought, to sleep in the bed that I shared with him for years, to feed your child at the kitchen table he f**ked me on?"

An explosive confrontation between Rachel and Anna would be pretty exciting to watch, and probably very satisfying for anyone who's ever been cheated on.

What makes Rachel such an interesting character is that she isn't perfect, and she knows it. She wants to punish herself, she wants the world to confirm what she already thinks: that she's somehow bad. It's the kind of tortured, yet relatable emotion Blunt would nail onscreen.

9. "What if the thing I'm looking for can never be found? What if it just isn't possible?"

The eternal question, am I right?

10. "I just don't know whether he's the condemned man or the executioner."

But I do know that he's fine as hell.

11. "That's the point, you can say anything to strangers. But that isn't completely true. you can't just say 'anything.'"

12. "I'm a good liar. Even if she did check, the thing with Rachel is, she won't remember what happened tomorrow anyway."

Tom, being cocky, should definitely be in the movie. (I also just want to watch Justin Theroux say something so cruel; I think he'd do it well.)

If this appeared in the film, it would earn a place in harshest movie insults history, right up with "You're a virgin who can't drive."

When all is said and done, the film adaptation of The Girl on the Train doesn't need to have all the dialogue form the book word for word. As long as the tone and feeling behind these quotes are there, I'll be happy.