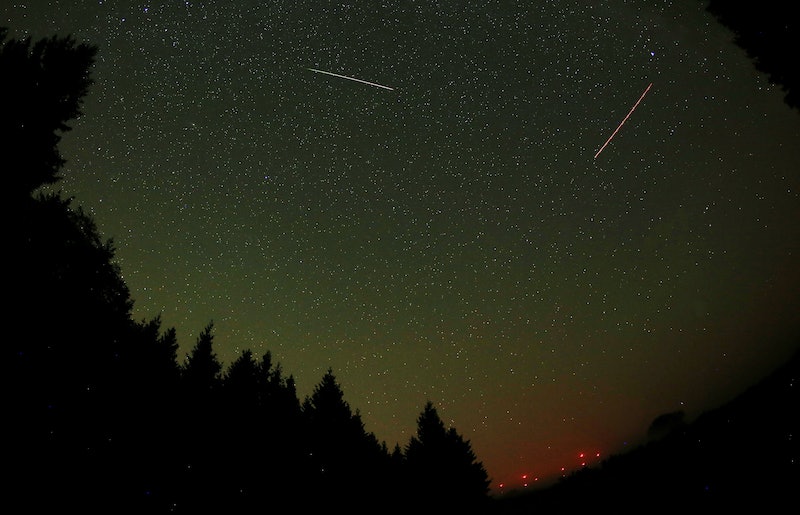 Based on the number of notable celestial happenings this autumn, the saying "as above, so below" is really beginning to take on extra weight. So far we've seen two eclipses, a Harvest Moon, a Black Moon, and now, a meteor shower. But what does the Draconid meteor shower mean, if anything? Well, for one, it means there will be a whole bunch of shooting stars passing though the night of Oct. 7, 2016. And you know what shooting stars are supposed to do? Grant wishes. And you know who could really use some wishes granted? Uh, everyone who lives on Earth.

Now, to be clear, though meteor showers are commonly known as "falling stars" or "shooting stars," they're not actually comprised of stars at all — they're dust debris from comets. Because they're directly related to both the Earth's rotation and a comet's orbit, most showers tend to occur on a yearly basis, though their intensity varies. In this case, the Draconids are an annual event that occurs when the Earth passes through the dust debris left behind comet 21 P/Giacobini-Zinner. Oh, and they're named after the constellation "Draco the Dragon." Yes, really.

Unlike a lot of celestial goings-on, the Draconids are best watched at dusk, just before true nightfall. For those so inclined, there actually aren't any "tricks" to catching a meteor shower — literally, just look up. Be patient. Try to avoid places with a lot of tall, horizon-blocking buildings and a high amount of light pollution. Suggestion: Lie on the ground. Craning your neck for an hour pretty quickly becomes un-fun.

In ancient Greece, it was believed that shooting stars were the souls of the dead; Christians and Jews thought them to be fallen angels or demons. Early Brits saw these streaks of light as the souls of new babies arriving home. Ptolemy, the Greek astronomer, believed that the gods, out of curiosity, would occasionally peer down at Earth from between the spheres, and often lose their grasp on a few stars. A shooting star, he believed, was an indication that the gods were paying attention — hence the tradition of tying your wish onto a shooting star.

Though you'd expect astrology to be all over the deep meaning of meteor showers — after all, they are the ones who coined, "As above, so below" — shooting stars are seen broadly as omens. They are reminders of a universe big and vast and so far beyond the realm of our understanding. And if you believe in wishing on a shooting star, that moment, that pause when you become present and you send out an intention into the universe — that alone is sacred in its own way.