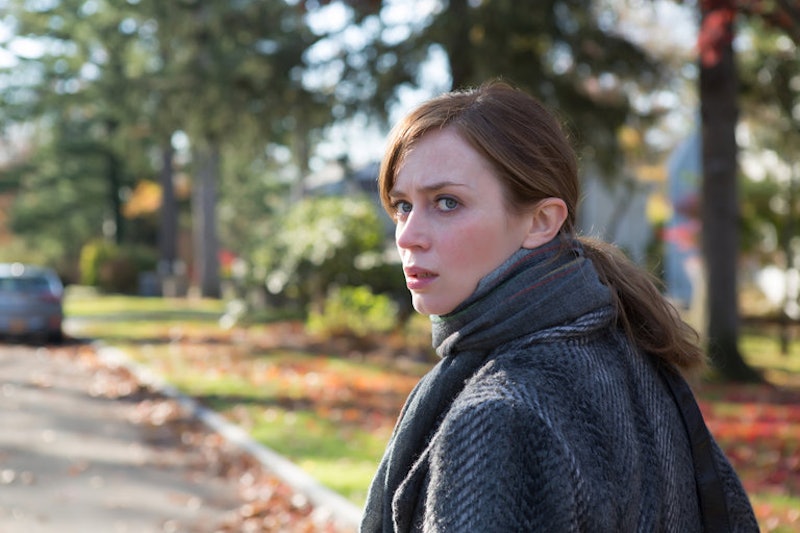 Nothing makes me happier than a great movie soundtrack, and I know I'm not the only one counting down the days until I can get my hands on the tracklist for The Girl On The Train. The new thriller starring Emily Blunt sounds moody and intense, and I'm anticipating the film's soundtrack will be equally atmospheric, so that I can set the tone for events in my life like hardcore autumn strolls and frantic races to meet deadlines. Fortunately for me and my music-loving peers, the soundtrack will be here on Oct. 7, the same day as the film's release. In fact, it's already available for preorder on Amazon, and the site has provided the track listing so your eyes can get a sneak peak before your ears do. Looking at the list, though, you'll notice something: The soundtrack for The Girl On The Train is missing an important element.

Yes, I'm talking about that "Heartless" cover, heard in the movie's trailer. It's actually "Surfboard Fire," a deeply creepy and addicting Blitz//Berlin song that samples Kanye West's "Heartless" and slows the tempo of the original so much that it makes for a pretty trippy listen. The song, surprisingly, is not listed on the The Girl On The Train Original Motion Picture Soundtrack track listing on Amazon. In fact, the entire soundtrack is attributed to iconic composer Danny Elfman, which makes me think it's more a traditional film score — and probably an amazing one — than a soundtrack compilation with numerous artists.

Though "Surfboard Fire," which is a truly cool song on its own, is available to stream on Spotify and purchase on iTunes, the version of the song with the West samples that has been getting so much buzz is not available anywhere to stream or download, which makes it all the more surprising that it's not included on the movie's soundtrack. The puzzle pieces seemed to fit together to indicate that that's how we'd be able to listen to it.

But the track listing for Elfman's The Girl On The Train score is super exciting in its own right. Elfman is one of the most successful and memorable film composers in history, and he's created some incredible film scores, including ones for Nightmare Before Christmas and many other Tim Burton projects. And Elfman's song titles for The Girl On The Train are deliciously mysterious: the soundtrack includes songs such as "Something's Not Right," "All F*cked Up!," the curious "Deviled Eggs," and my personal favorite, "Really Creepy" — I'm dying to know which scene is score to that track.

More like this
Rita Ora Celebrates Finding Her "Fairytale" Ending With Taika Waititi
By Sophie McEvoy and Catharina Cheung
Taylor Swift Wants To Direct A Movie Next — But You Might Have To Wait
By Radhika Menon
Even If She Tried, Beth Ditto Couldn’t Stay Away From Music
By Ivana Rihter
Everything To Know About Taylor Swift’s 10th Studio Album, 'Midnights'
By Grace Wehniainen and Jake Viswanath
Get Even More From Bustle — Sign Up For The Newsletter