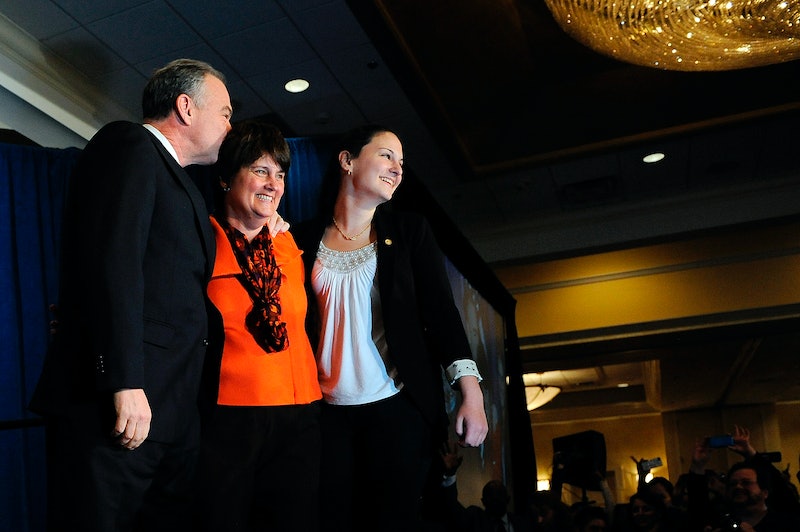 With the two vice presidential nominees scheduled to duke it out formal-debate style at Longwood University in Virginia on Tuesday evening, viewers at home will almost certainly be able to spot members of the Kaine and Pence families in the audience. The likelihood that the eldest of the Kaine children, though, will be available to attend his father's one-hit-wonder debate against Pence is slim, as Nat Kaine is an active member of the U.S. Marine Corps. Where is Tim Kaine's son, Nat, deployed? There are only clues as to the Marine's location, since providing specific information regarding his deployment could jeopardize his battalion's security.

During a speech made at a VFW convention in July, Hillary Clinton stated that Kaine's son was "actually deploying [that day], to help defend our NATO allies in Europe." Clinton's phrasing doesn't necessarily recognize Kaine's eldest son as being stationed in Europe; it's possible she was only clarifying that the NATO allies are in Europe. However, one of Kaine's aides did tell reporters that the Virginia senator's son was en route to Europe, CNN reported in July.

Kaine actually mentioned his eldest son's deployment during his speech at the Democratic convention back in July.

You know my son, Nat, deployed with his Marine battalion just two days ago. He deployed overseas to protect and defend the very NATO allies that Donald Trump says he now wants to abandon.

The eldest of the Kaine offspring has been an active-duty Marine since January 2013, after graduating from the ROTC program at George Washington University. Like his younger siblings, Nat attended public school in Richmond prior to starting his undergraduate career at GWU.

This year's DNC wasn't the first time the Virginia senator brought up his now 26-year-old son in the context of U.S. troops. While campaigning in 2012 for his seat on the U.S. Senate, Kaine spoke of his son during a debate against his Republican opponent George Allen.

Kaine's two other children, Woody and Annella, will likely be in attendance at Tuesday's debate with Kaine's wife, Anne Holton. Holton served as Virginia's Secretary of Education from 2014 to 2016 and is the daughter of former Republican governor of Virginia, Linwood Holton.

More like this
5 Ways To Stand In Solidarity With Women In America From The UK
By Sophie McEvoy
How To Fight For Reproductive Rights, Based On How Much Time You Have
By Courtney Young
Boris Johnson’s Leadership Is In Question – Again
By Bustle UK
'The Undeclared War' Took Inspiration From This Gavin & Stacey Location
By Maxine Harrison
Get Even More From Bustle — Sign Up For The Newsletter