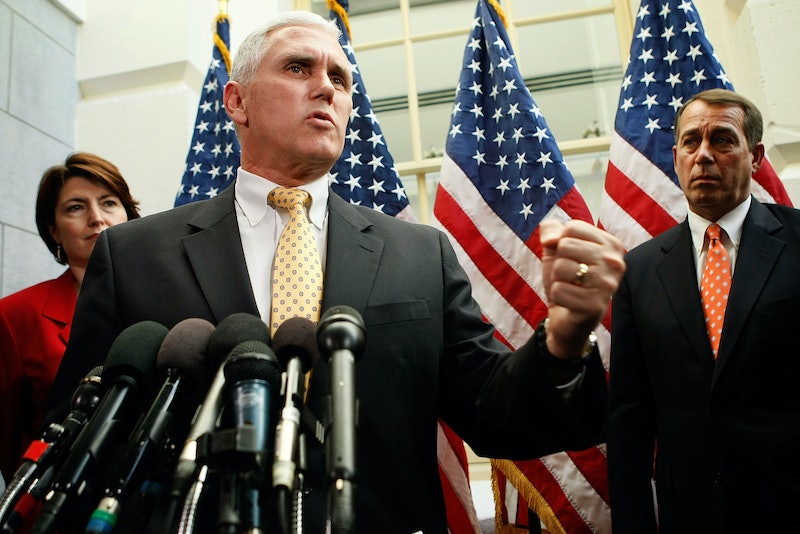 Unlike the running mate at the top of his ticket, GOP vice presidential nominee Mike Pence has run for office in the past. In fact, the Indiana Governor has spent a fair amount of time campaigning for various political seats over the years and there has been some interesting reporting about him in that time. After kicking off his political career in 1988, the GOP vice presidential nominee started down a long career path in government. And by 2006, Pence wanted John Boehner's job as House Minority Leader, even though the latter crushed him in the race.

The New York Times reported at the time that Boehner beat Pence in the race with 168 votes to Pence's 27 votes, so it wasn't the closest matchup ever. But Pence has a huge job during this election, and that's to make Trump seem slightly less horrible, clean up his messes, and maybe even offer some substance to the former reality TV star's policy platforms while he's at it. Is it possible? Not likely. Pence is no walk in the park either.

Ten years ago, Pence challenged Boehner's leadership spot in the House. However, the Ohio congressman was a veteran Republican who was unlikely to lose the position in the first place. But aren't we so glad? We've gotten some great shots of Boehner crying over the years.

When Trump announced Pence as his VP pick, Boehner was supportive and released a statement to his website. It reads as follows:

Governor Mike Pence is an exceptional leader, and an even better man. As chairman of the House Republican Conference during a critical time for our country, he played a key role in helping us earn the majority in the House. And with his heart, honesty, and integrity, he won the trust and respect of everyone with whom he served. I’ll always be grateful for his friendship; his loyalty to the team and the cause during his years in the House; and the relationship we continued to have after the people of Indiana chose him as their Governor. I congratulate Mike, Karen and their family.

Times have changed since 2006, it seems. The Indiana governor's aspirations and goals have become more far-reaching. Pence once wanted Boehner's job — now he wants Joe Biden's.