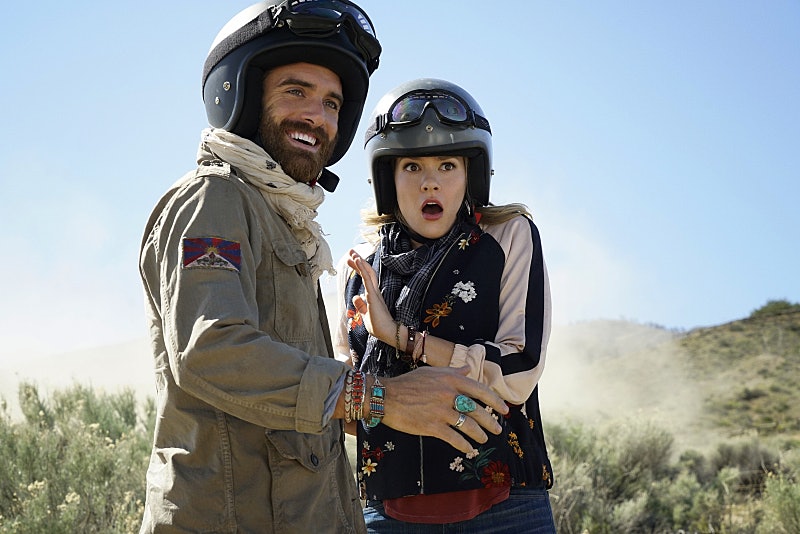 Fear, worry, and an overriding need to stay in control are a few of the reasons why No Tomorrow 's Evie may be the most lovable newcomer to the CW stable. By our normalized societal standards, Evie is killin' the game: She's holding down a steady job, has charming, supportive friends, favors organization and preparation over chaos, doesn't take risks and is her own woman. For all intents and purposes, everything should be going great for Evie. She should be happy. Very early on in No Tomorrow, it becomes apparent that something is missing in Evie's life. There's a contemplative frown that seems to be plastered on her face. As a Millenial, I can't tell you how good it feels to see a female character so recognizable and relatable as Evie on television. Her sense of dread corresponds to a very real sense of dread that I (and probably some of my Millenial peers) feel as we try to make sense of adult life.

The alarm bells that literally and figuratively go off when Evie hears that the apocalypse will occur in eight months struck a big chord with me. Sure, in the real world there is no impending Armageddon-like end being predicted by scientists. Eight months from now, I may very well be eking out the same kind of existence I am at this moment. The same goes for my fellow humans and their own lives. But the fear that comes with hearing everything may end in a major way while feeling as if you haven't accomplished everything you would like to accomplish in this life feels incredibly real to me. Evie's panic is my panic. It's a uniquely Millenial panic. It's the kind of panic that comes with wondering if we're doing things correctly, living in a correct manner, and then suddenly, we're made to question everything we were taught when we get thrown a curveball.

When Evie takes a moment to gush over Xavier's trip to Machu Picchu or feels an instant reticence at accepting Timothy's marriage proposal despite her mom and sister saying its the sensible (read: normal) thing to do, it's easy to feel a kinship. Evie's struggle to honor her heart (representative of impulse, spontaneity and primal desire) over her mind (representative of logic, reason, reservedness) perfectly embodies the same kind of Millenial temperament that many of us experience regularly. Are we taking the right steps in our careers and relationships? Are we moving in a direction deemed acceptable by society? When was the last time we did something for ourselves, something impulsive or exhilarating?

On the plus side, Xavier is a physical manifestation of Evie's heart, not only in a romantic sense but in the possibility of adventure. Xavier acts as an avatar for the real life Millenial's heart and subsequent impulse for adventure and fulfillment. He is simply a fictional representation of the very real possibilities we as young adults have to proverbially (yes, I'm going to say it) carpe diem. We can live vicariously through him whilst watching No Tomorrow. While we're all making a way for ourselves in the world during our 20s and 30s, can we honestly say that if we had eight months to live we'd be happy with what we've created for ourselves? Would we be happy with the lives we've lived thus far? Xavier's presence reminds us of these questions and through Evie, we'll get to see some possible answers.

Evie's fear when she learns of the impending apocalypse is her starting point in No Tomorrow. That fear may make her so readily accessible, but it's her eagerness to seek fulfillment that makes her a compelling character to watch. I, for one, am very excited to see what journey Evie takes; maybe she'll give me better insight on how to quell my own Millenial panic in the process.

More like this
'The Simpsons' Will *Finally* Address How They “Predict The Future”
By Sam Ramsden
The 'PLL: Original Sin' Creators Say A’s Identity Will Be “Very Clear” By The Season Finale
By Alyssa Lapid
'The Sandman’s Ending Is A Departure From Neil Gaiman’s Comic Book Series
By Kadin Burnett
The Bestselling Novel 'The Doll Factory' Will Be Adapted Into Thrilling TV Series
By Catharina Cheung
Get Even More From Bustle — Sign Up For The Newsletter