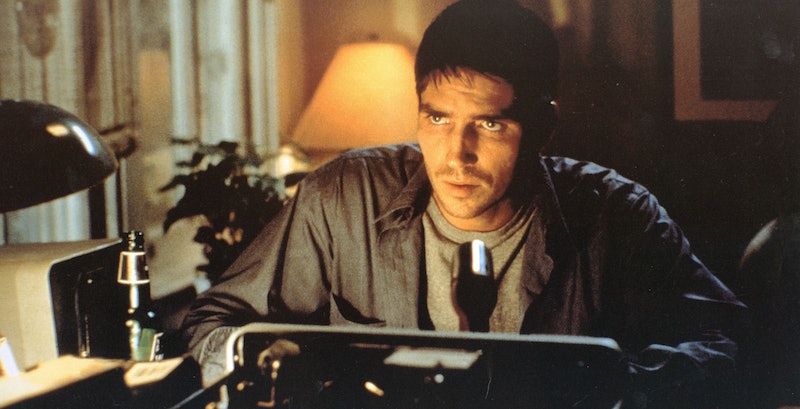 With the premiere of the new drama Timeless and the constant timeline surfing in the CW's superhero line-up, TV is loving time travel right now. This week, another era-jumping series joins the pack. Frequency debuts Wednesday night on the CW and stars Peyton List as Raimy Sullivan, a New York cop who discovers that she can speak to a past version of her deceased father via his old ham radio. A police officer could do a lot of good with the benefit of foresight; Raimy and her dad use their inexplicable connection to become a metaphysical crime-fighting team. Frequency is based on the 2000 film of the same name, where a son and the firefighter dad he lost use the same methods to catch a serial killer and mend their family.

The plot of Frequency does lend itself to serialization. After the CW series was announced, I rewatched the movie for the first time in years. Though the strange concept could have been realized poorly, Frequency stands up, both as a mystery and as a love story between a son (Jim Caviezel) and the father he idolized (Dennis Quaid.) Read on to brush up on the events of the movie before catching that CW premiere.

Brave and selfless, Sullivan dies saving others. He leaves behind his wife Julia (Elizabeth Mitchell) and his young son John.

John Sullivan is all grown up, but still stuck in the past. He's an NYPD officer (like the series lead), but he's floundering personally. His girlfriend breaks up with him because John refuses to move on and let his parents' house go. Something just doesn't feel right.

Frank Sullivan Hears A Familiar Voice On A Radio

John's best friend finds a ham radio and gives it to John when he can't get it to work. Ham radio broadcasting was one of Frank's hobbies; this set belonged to him. The night before the anniversary of his father's death, John realizes that the person talking to him about the 1969 World Series is his dad. John warns Frank of the fire that will take his life.

The Future Starts To Change

With John's warning in mind, Frank gets through that fire call alive. There's a Butterfly Effect that ripples through John's life. He begins noticing changes to his present and his history. But Frank is still dead in the present, this time of lung cancer. In this timeline, Julia Sullivan is dead too.

John is assigned to work the case of a serial killer who stalked and murdered three female nurses in the '60s. One of the Nightingale's victims was John's mother.

Frank & John Work Together To Find The Truth

You know what they say about hindsight. John feeds facts about each case to his father over the radio. In the past, Frank tries to step in and save each victim before the Nightingale can claim them.

Frank fails to save the second woman. But he hung around her before the murder, in front of witnesses. The Nightingale doesn't have to do much to turn police suspicion over to the firefighter. Frank's friend and John's future boss, Detective DeLeon brings Frank in for questioning. In the present, John figures out that the killer is former cop Jack Shepard, who's still alive in the new timeline.

Frank & John Each Fight Shepard In His Own Timeline

Two fights ensue, one in the '69 when Frank escapes the precinct and goes to Det. Shepard's apartment and the other in John's home where the retired Shepard comes to kill him. Through time, the father and son fight Shepard off. When Frank shoots Shepard's hand in the past, it disappears in the future. Just as John is about to die, an older version of his father that he's never seen before kills his attacker.

The Sullivans Live Happily Ever After

Welcome to the correct timeline. Having given up smoking, Frank avoids cancer. Julia is there too, since Shepard was foiled before he could find a third victim. Frank runs the bases in a family softball game, his son and his grandson waiting for him at home plate.

The plot of the movie proves that Frequency the series has the potential to be a really unique and touching procedural. Here's hoping they get it right.

More like this
‘Squid Game’ Creator Hwang Dong-Hyuk Just Dropped A Major Season 2 Tease
By Brian Anthony Hernandez and Bustle Editors
What Is 'Pretty Wild' Star Tess Taylor Up To Now?
By Morgan Leigh Davies
Where Is The Bling Ring’s Rachel Lee Now?
By Arya Roshanian
Where Is Armie Hammer’s Ex-Wife Elizabeth Chambers Now After 'House Of Hammer'?
By Grace Wehniainen and Radhika Menon
Get Even More From Bustle — Sign Up For The Newsletter