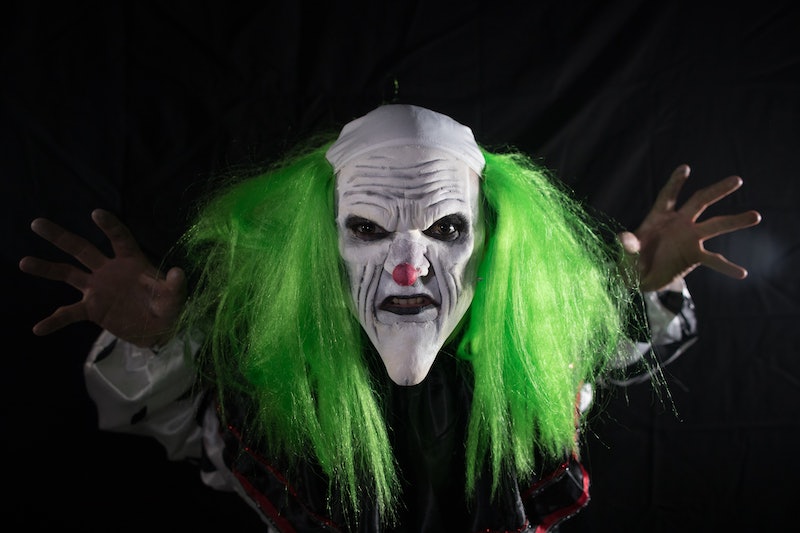 With all the creepy clowns menacing the country these past few weeks, you probably have questions. First and foremost, when did Stephen King start writing our national history? Second, why are people scared of clowns in the first place? Because there's no doubt about it: Clowns creep us out. So what's the history of the clown? What's the psychology behind it? Can anything explain why so many of us consider something that's meant to be fun, absolutely terrifying?

Unfortunately, I can actually pinpoint the day my fear of clowns originated. While visiting my friend in her creaky, midcentury home as a child, I was distracted from playing hide and seek by a movie her parents had left on: Stephen King's It . You can imagine how well a nine-year-old tolerated that particular movie. That night, as I failed to sleep in a room surrounded by her grandmother's collection of ceramic clown dolls (I kid you not), I decided to give the so-called entertainers a wide berth for the rest of my life.

But even people who weren't forced to sleep under the gaze of dozens of tiny, aging clown figurines tend to find them creepy, so what gives? Although most of us don't have true coulrophobia, or the irrational fear of clowns, they've been unsettling people for centuries. As Smithsonian Magazine points out the clown goes way back: The court jesters of ancient China, the medieval fool, and of course, the bumbling, chaotic pantomime clown familiar to most people today. You have 18th century British performer Joseph Grimaldi, who is widely considered to be the father of modern clowning, to thank for the exaggerated makeup many clowns use today, by the way; according to the Telegraph, he used white face paint and two red spots on his cheeks to emphasize his facial features for audience members.

In theory, clowns are supposed to be a silly figure — capering, merry pranksters. And yet, in modern pop culture, the clown is a source of fear as much as it is entertainment. In an interview with Vulture, psychiatrist Steven Schlozman says it all goes back to fear of the uncanny: Because a clown's expression (usually a smile) is utterly fixed, audience members eventually start to get uncomfortable. "You recognize a smile, your brain registers that smiles are largely good things — and yet you can’t smile all the time, because if you’re smiling all the time, something’s not right," he explained.

In a study earlier this year, researchers found that ambiguity is responsible for making something, or someone, feel creepy. Between the makeup masking their true expressions and clowning's history of using dark humor, clowns play on ambiguity all the time. It certainly doesn't help that the aforementioned father of clowning, Grimaldi, lived a life marred by alcoholism and depression, a far cry from his joyous clown persona. The famous French mime Jean-Gaspard Deburau even killed a boy with his walking stick in 1836, although he was later acquitted. Then there's John Wayne Gacy, the American serial killer who was a popular clown performer at children's parties before he was caught.

So there's an element of wondering who's behind the perpetual smile, which only became more unnerving as clowns became increasingly seen as children's entertainment. By extension, this sets up an "expectation of innocence," as Smithsonian puts it, and after Gacy was caught, the clown went from a creepy-yet-tragic character to outright terrifying. Several decades and dozens of horror movies later, the clown has a bit of a public relations problem; you'd be hard-pressed to find a positive portrayal made in the last ten years.

So there you have it! Clowns are scary because we don't know who's hiding behind the performance. In all likelihood, the only thing they're hiding is a joy buzzer, but with all the scary clown sightings lately, I'd say we're allowed to be a little creeped out.

More like this
Lotus Biscoff Does A Biscuit-Chocolate Hybrid Now
By El Hunt
Revisit 1992’s 'A League Of Their Own Cast' Photos After The New TV Series
By Grace Wehniainen
At 28, Lesley Manville Was Acting, Picketing, & Singing Kate Bush Songs
By Olivia-Anne Cleary
Reese Witherspoon Gave Fans Hope For 'Legally Blonde 3' After This Surprising Movie Inspired Her
By Jake Viswanath
Get Even More From Bustle — Sign Up For The Newsletter