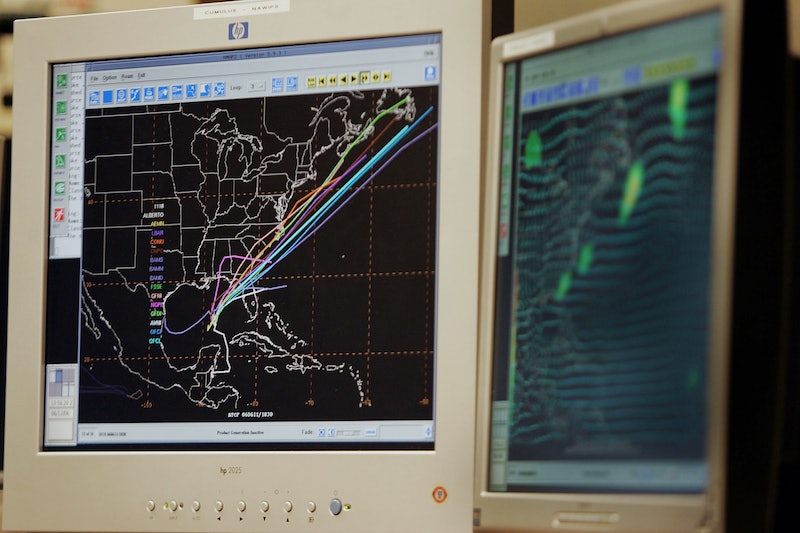 Hurricane Matthew, the most powerful Atlantic storm in 20 years, has now reached the United States coast. If you want to track this highly powerful storm, there are a number of websites and apps that will allow you to view Hurricane Matthew in real time.

Hurricane Matthew is still a Category 4 storm as it continues to move toward the coast, prompting 2 million Americans to be encouraged to evacuate. The hurricane had decreased to a Category 3 level but regained power by Thursday morning with sustained winds of 140 mph. Florida Gov. Rick Scott activated 3,500 members of the National Guard, and President Obama signed an emergency declaration in preparation for a storm that could leave damage and destruction in its wake. "Do not surf. Do not go on the beach. This will kill you," Scott said on Thursday. "There is no reason not to leave."

Up-to-date tracking of the storm can be found on the Weather Channel and National Weather Service websites. And for those interested in tracking lives feeds of the storm, there are ways to stream live weather models via Periscope. In one Periscope video, meteorologist Michael Clark of BAMX, showed a weather model and gave an accompanying analysis and forecast, warning people not to ride the storm out.

In other Periscope videos, people shared footage of Florida beaches and other locations along the coast that are already facing high winds. Also on Twitter and Periscope are storm posts from author Grant Cardone, who provided live footage from Sunny Isles Beach, Florida. Live feeds from Jensen Beach, Florida, were also provided by veteran storm chaser Jeff Piotrowski, which you can find here.

Hurricane Matthew is being called the most powerful Atlantic storm since 2007, as the hurricane seems to be remaining steady in power, even though most storms tend to lose speed as they hit land. And that's what has made this hurricane so deadly and dangerous. Florida, Georgia, and South Carolina are watching the storm closely, and state of emergency warnings are in effect for all three states.

Hurricane Wilma, which hit the Caribbean, Bahamas, South American, Mexico, and South Florida in 2005, was a Category 5 hurricane and caused at least 87 deaths. Hurricane Matthew has killed more than 114 people across the Caribbean, with Haiti at a death toll of at least 108 fatalities thus far. And some experts are fearing Matthew could cause the type of damage that the 2005 storm left.

Winds are expected to sustain at 100 to 150 mph, as the storm continues to move up the Florida coast as a Category 4 storm. Meanwhile, local government and law enforcement are continuing to urge people along the coastal areas to evacuate.