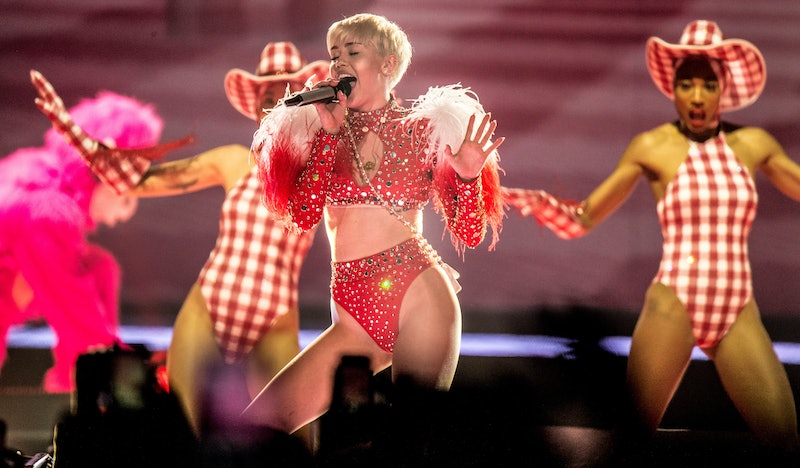 Another day, another Miley Cyrus stunt that makes us question all of humanity. We already know that Miley Cyrus likes to kiss fans during her concerts, but now she's doing something a little more... hydrating. Miley Cyrus spits water on fans during her Bangerz tour shows. And they like it! I don't know about you, but I cannot imagine ever liking anyone so much that I want water that has been inside of their mouth to come back out of their mouth and land all over my body. But I guess there's just some things you can never understand.

The water spewing occurred during Cyrus' Thursday night stop in Tampa, Fla. Cyrus reportedly took drinks from a water bottle and spit the water onto the crowd in, as Mail Online calls it, an "impressive yet vile stream." And this wasn't a one time thing. Cyrus spit on the crowd repeatedly.

After watching a video taken at the concert, I've got to admit that the spitting actually is impressive. Cyrus is weirdly good a spitting water a long distance. I have no doubts that she practiced. She's so good she could even team up with Lady Gaga if she's ever needs a new vomit painter.

In the clip, Cyrus walks across the stage and poses before taking a big sip and shooting it out over the screaming crowd. From what I can tell, these are positive screams, like, "Please spit water on me!" screams rather than "Ah! She's spitting on us but we can't leave because it's too crowded!" screams. What is wrong with these people?!

With Miley Cyrus kissing fans and spitting water on them, what could possibly be next for her Bangerz tour? Public urination? Giving fans her used tissues? Whatever it is, don't be surprised if Cyrus ends up sued for one of her antics. People sue for anything these days and Cyrus is obviously up for anything, so it's only a matter of time before these two paths cross.

More like this
Tristan Thompson Plays Drake’s Best Man In A Music Video Wedding With 23 Brides
By Grace Wehniainen
Olivia Rodrigo’s Song Dedication To 5 SCOTUS Justices Sent A Strong Message
By Grace Wehniainen
Everything To Know About J-Hope From BTS’ Solo Album ‘Jack In The Box’
By Stephanie Topacio Long
Will Beyoncé Be At The BET Awards To Perform “Break My Soul” Or Attend The Show?
By Jake Viswanath
Get Even More From Bustle — Sign Up For The Newsletter