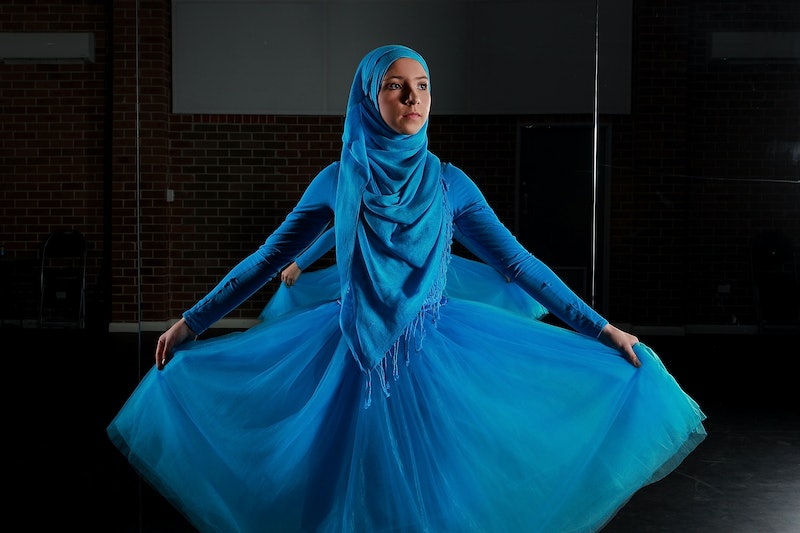 "Find solutions where others see problems. Always live to stand out and be yourself, ignore the haters, and do everything you can achieve your dreams." That's the sage advice Muslim hijabi ballerina Stephanie Kurlow, an Australian teenager on track to becoming the world's first professional hijabi ballerina, tells Bustle.

Kurlow, who's been dancing since the age of 2, went through classical ballet training last year and received a lot of media attention for her LaunchGood crowdfunding campaign aimed at raising money for ballet school. She raised nearly $7,000 through the campaign and also received a Game Changer Scholarship from Swedish sports brand Björn Borg, which supports athletes with big dreams. Now, Kurlow trains full-time for 25 hours a week and is one step closer toward her overarching goal.

"I want to empower youth, women, and those from racially and culturally diverse backgrounds, and break down the barriers and stereotypes ballet and filming industry presents to those who don’t fit its exclusive mold," says the 15-year-old from Sydney, Australia. Minority groups are often underrepresented in Australian ballet, although the industry is slowly changing to include people of different backgrounds, Kurlow says.

It's true. Dancers in the Australian Ballet School have traditionally been white, and while there are more Asian principal and senior artists than before, only one of them is South African. "Being the first Muslim hijabi ballerina is quite challenging, because the world hasn’t seen it yet," Kurlow says.

Several months ago, Kurlow created a short film about her ballet journey as part of a National Youth Week competition hosted by SBS and Foundation for Young Australians. The film, which was broadcast on television, provides a short glimpse into the hardships and criticism she's faced as a young Muslim hijabi girl who wants to pursue ballet as a career.

"Dance is important to me because its my way of creative expression and it's how I express my emotions and tell stories," Kurlow says. "It also gives me confidence and is the best feeling in the world when I'm dancing."

Kurlow converted to Islam six years ago, and says it's important that her ballet training and religion don't interfere with each other. While she hopes to become the world's first professional Muslim hijabi ballerina, her dreams don't stop there. "[I] want to create my own performing arts school and company to cater to people of different abilities and cultural backgrounds," Kurlow says, adding that she also wants to develop support groups that provide performing arts therapy to people with disabilities from rural and aboriginal communities.

She also wants to break into the film industry to help represent Muslims and other groups that don't get nearly enough screen time. In fact, research shows that out of the top 100 films in 2014, about three-quarters of the characters were white, while only 17 characters featured lead actors of color. (That's only 27 percent covering black, Asian, Hispanic and Latino, and other backgrounds combined).

The road to success hasn't been easy, as Kurlow says she's received a lot of hateful anti-Muslim backlash online, but she manages to laugh it off with her friends and find support through her family and 15,000 social media followers. "Despite the criticism, I advocate as much as I can for the empowerment of youth, women and those from racially and culturally diverse backgrounds I can't give up my dream just because of a small bunch of Islamophobes," Kurlow says. "There are a lot of people in the world that are ignorant of other cultures and religions, and I truly hope to educate them with my story and message and smash stereotypes about culture, race, ability, and gender."

To young women everywhere who are struggling to do what they love, Kurlow says it's important to never give up and grab every opportunity that presents itself, while also being true to your personal values. "As silly as it sounds, I was just a normal girl in Sydney, Australia and now I have thousands of people supporting me," she says. She adds that more women should be proud of their identities, whether that's being Muslim, Sikh, Jewish, Christian, atheist, or anything else, and never compromise who they are in order to fit the norm or meet other people's expectations.

While she's dedicated to breaking down traditional stereotypes associated with being a ballerina, Kurlow emphasizes that her mission is goes beyond dance. "This isn’t just about me becoming the first hijabi ballerina," Kurlow says. "It’s about young people who often miss out wanting to become ice skaters, journalists, and actors to pursue their dreams because of their beliefs or how they look."