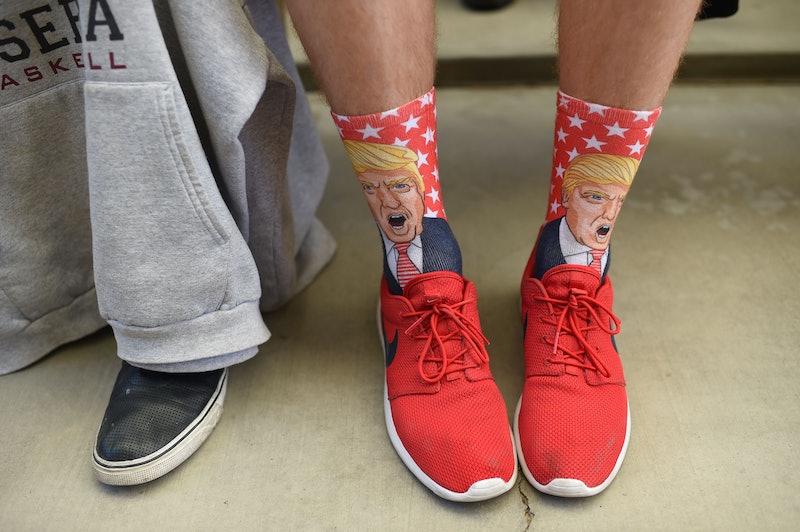 As a woman who, a) has been in an emotionally abusive relationship in the past, and b) has ears and eyes, I truly can’t fathom any woman choosing to vote for Trump or tolerating a partner who supports Trump. And look, I’m not against having differences in political opinions. I’m not even against mixed-political party couples. I think that both of those things contribute to a healthy political dialogue that moves our country forward. But this dude? I think it's not only time to dump Trump — it’s time to dump that Trump supporter.

Jill Filipovic published a piece in Time recently, titled “Break Up With That Trump Supporter,” and before I read even the first line, I felt myself nodding in agreement. Filipovic perfectly phrased why support for this presidential candidate is worth ending your relationship with a Trump supporter over:

This is not just a political disagreement, as if one of you supports free trade agreements because you think they bolster the economy and the other believes they’ve wreaked havoc on the American working class. It’s not a difference of political opinion, where you both want to see low-income Americans thrive, but you disagree on how to get there. This is about fundamental values: How should we treat other human beings? Is blatant, aggressive racism acceptable? Are women human?

Filipovic is talking mainly to women who date men because, as she points out, the majority of Trump supporters are men. While the Republican party has its fair share of women, a Gallup poll back in April found that 70 percent of American women had an “unfavorable opinion” of Trump. When you consider the fact that 52 percent of American women are Democrats, it’s simple math to see that a lot of Republican women are not down with the Donald.

So what does it mean for women who are dating Trump supporters? Filipovic is explicitly clear about that too. She writes:

Whelp. Guess that’s that, huh? But if you’re still unconvinced that dating someone who supports Trump may be NBD, here are the reasons I'd dump a Trump-supporting partner, stat:

If Trump's lewd pussy-grabbing comments weren't enough to remind you he has no respect for women, as Clinton pointed out in the first debate, Trump has said some truly horrendous things about women over the years, calling specific women a “pig,” “dog,” and even “disgusting.” By supporting Trump, a partner is implicitly saying that they’re OK with those words being used to describe you and your fellow women.

If your partner’s response to bigotry is ‘So what,’ that tells you everything you need to know about their character. If you’re a woman, this isn’t some ephemeral idea or hazy theory — it’s about you, and your very humanity.

As documented in The Atlantic, Trump allegedly made passes at a woman who ran a pageant with her husband, groped her at a party, and “forced [her] into bedrooms and made passes at her.” He also allegedly got into bed with one of the models after a party, even though she says she never asked him to join her.

With the Miss Universe pageant, this trend of treating women as sexual objects continued. Trump is quoted in Vanity Fair saying “Honestly, when I bought [Miss Universe], the bathing suits got smaller and the heels got higher and the ratings went up.”

Oh, and then there’s the time he told a female contestant on his reality show, “That must be a pretty picture, you dropping to your knees.” The look on that woman’s face is so relatable to anyone who has ever had to swallow sexual harassment from a work superior that I can barely watch the clip. Do you really want to be with someone who supports a person who displays that kind of disrespect and disregard for women?

3. Trump Thinks Women Should Only Be Homemakers

Trump described his mom as the “ideal woman” in a New York Times piece from earlier this year. While that could be just a sweet nothing that someone says about their mother, it becomes very clear that Trump’s “ideal woman” is a homemaker. He's even quoted in a video from 1994 as saying, “I have more respect for a great homemaker as a wife than I do as a wife who’s a good wife and a good businessperson." Not that there’s anything wrong with being a homemaker, of course. But this characterization of “ideal” womanhood becomes problematic when that role becomes the only role available.

Need more evidence that Trump doesn’t think you should hold a job? Consider the fact that he hasn’t put forward any proposals for family leave, child care, or equal pay. Oh, and there’s the fact that he once said “putting a wife to work is a very dangerous thing” in reference to his then-wife Ivana. I could go on, but do you really need me to?

When Trump responded to the question in the second presidential debate about race relations in the U.S. by talking about how African-Americans are hurting each other in the "inner cities," I almost threw my computer across the room in anger. It was just the latest in a long string of racially-targeted and bigoted things that Trump has either implied or said directly about not only African-Americans but Latinos and Muslims as well.

And if you want to look specifically at actions some (not all) Trump supporters have taken, there are multiple examples of African-Americans being yelled at, physically assaulted, and being barred from Trump rallies.

Certainly not all Trump supporters are racist or bigoted, and they may disagree with the inappropriate comments he's made. But racism is a deal-breaker for me when it comes to choosing the people I date. Period. The end.

Is it any surprise that Trump doesn’t believe that women should have the right to choose whether or not they want to carry a pregnancy to term? He’s on record saying that women who have abortions should be “punished” for practicing their right to do what they want with their own bodies.

Personally, I don’t date people who are anti-choice because it shows that they don’t think I should have the ultimate say in what happens with my body and f*ck that. Oh, there’s also the fact that I date people who could, in theory, get me pregnant and if I got pregnant accidentally, I would never want the added stress of an anti-choice partner. Of course, not all Trump supporters are pro-life, but it is scary to me that they wouldn't mind having someone who takes this stance run our country.

6. Trump’s Ex-Wife Has Accused Him Of Allegedly Violating Her During Sex

Ivana Trump, the first of Trump’s three wives, once described in a deposition an incident she had with Trump as alleged rape, which she later amended to “felt violated.” The description of what allegedly happened can be found in this Daily Beast article but please be warned: It is graphic, horrific, and had me actually gasping out loud when I read it.

Trump’s lawyer at the time is also quoted as saying that “you cannot rape your spouse,” which was technically true in 1989, when the alleged violence occurred (the spousal rape law was passed in 1993), but is extremely problematic regardless of the legal technicality at the time.

7. Republicans Are Less Likely To Use Condoms

According to the SKYN Condoms Millennial Sex Survey, there are marked differences between Republicans and Democrats when it comes to activity in the bedroom. One thing it uncovered in its survey of 5,741 sexually active men and women between the ages of 18 and 34 is that only 46 percent of Republicans use condoms, compared to 60 percent of Democrats.

Again, I'm not saying that all Republicans are Trump supporters, or that they hate condoms, or that you should never date a Republican — neither of those condom usage numbers are great, and we should all do better. But, I’d personally prefer to take my chances with the party with the higher percentage points, thanks.

8. Trump Supporters Are More Likely To Have A Lot Of Exes

According to a study conducted by the dating site Match, Trump supporters are 54 percent more likely than Clinton supporters to have had five or more exes. Not that there’s anything wrong with dating, but many exes could indicate a pattern and, potentially, a problem.

I'd consider making yourself number six by dumping that Trump supporter.