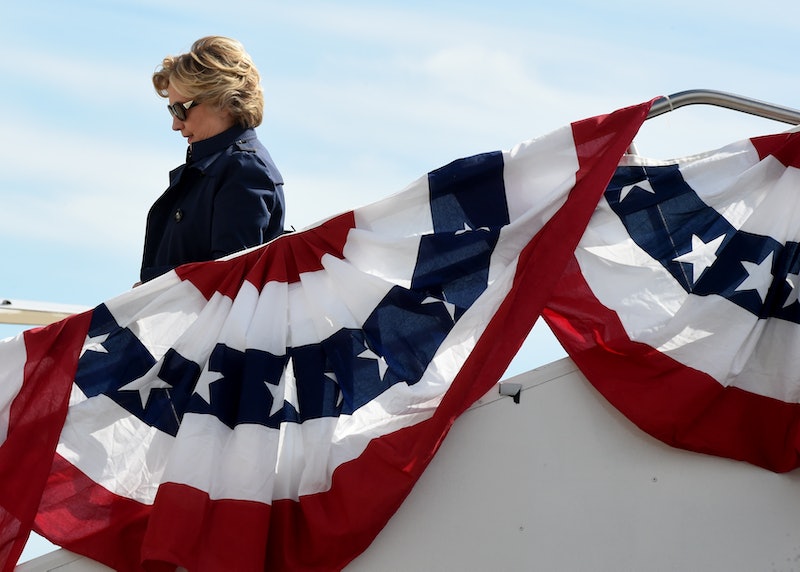 It's not often that you hear the words "presidential nominee" and "pussy" in the same sentence, but that's the effect that Donald Trump has had on American politics. On Saturday, The Washington Post shared a 2005 recording, in which Trump described — disgustingly — some of his physical behaviors toward women. Fortunately, women have shot back with a "pussy grabs back" message for Trump.

Among many other unpleasant things, the recording released by the Post includes Trump's voice saying such things as, "...when you're a star, they let you do it," and, "Grab them by the pussy," in reference to women. The recording came from a conversation that Trump had with Billy Bush, then a host of Access Hollywood. For Bush, the publication of the recording has meant a potential break from his current gig with NBC's Today. For Trump, it has meant widespread criticism and a potentially tough debate on Sunday night against former Secretary of State Hillary Clinton.

Some of the harshest criticism has come, understandably, from women. Over the weekend, the response from women spread online, with the hashtag #PussyGrabsBack going viral. Celebrities like actress America Ferrera, a vocal Clinton supporter, joined in the conversation.

The message was reportedly started by two women by the names of Amanda and Jess. They've since created a T-shirt to spread the message, which is for sale through Female Collective. The proceeds from sales of the T-shirt will reportedly be donated to RAINN, the Rape, Abuse, and Incest National Network. Fittingly, RAINN is the nation's largest anti-sexual violence organization, operating response hotlines and support centers across the U.S. for victims of sexual violence.

Beyond the shirt and the hashtag, a Pussy Grabs Back song has also made its way through the conversation. All of the anti-Trump rebellion came ahead of Sunday night's second presidential debate between Trump and Clinton. The debate had already been much-awaited, but the timing of the Post's story only added fuel to the fire, with debate viewers eagerly awaiting the candidates' responses.

Trump himself responded to the 2005 recording with an allusion to the debate. "I’ve never said I’m a perfect person, nor pretended to be someone that I’m not... See you at the debate on Sunday," Trump said, according to the Post. Although they're the most recent — and perhaps, the most graphic — of Trump's comments about women to come to light, the statements in the published recording are far from Trump's only misstep with female voters. He may — and should — have to answer for the larger pattern of his offensive rhetoric on the debate stage on Sunday.