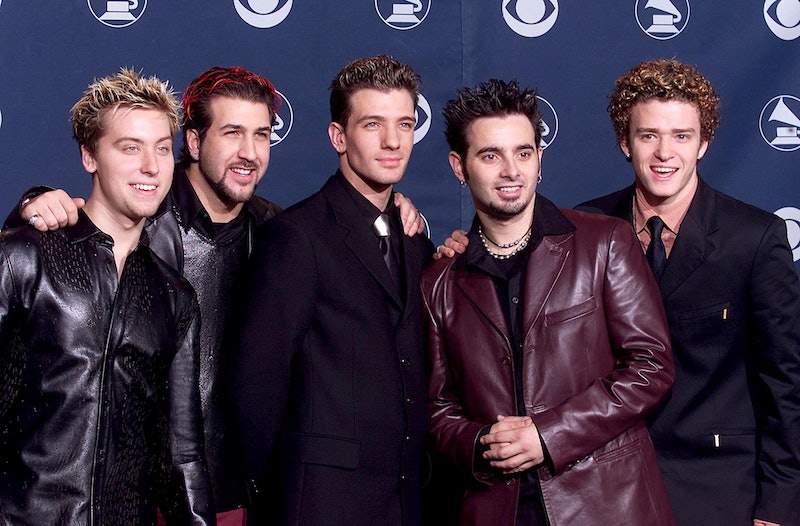 Nothing says "campy melodrama" quite like an unauthorized Lifetime biopic. When it was announced that Britney Spears' career would be getting the Lifetime treatment, I instantly began imagining which set pieces and major life events would be resurrected. (And, of course, whether or not a fictional Justin Timberlake would pop up.) And sure, while I know that there's bound to be some stretching of the truth and imagination, especially when it comes to casting, I don't think I (along with a fair share of the populace) was quite prepared for the unveiling of the Lifetime version of *NSYNC for the biopic.

Spoiler alert: They nailed it, right down to Timberlake's ramen noodle-esque curls, Chris Kirkpatrick's dreadlock braids, and the absolute swagger the boy band had in those early years. Their fictional counterparts are swinging for the fences. Of course, they're not carbon copies — one look at the group photo and it becomes clear that these guys aren't even close to dead ringers for the real *NYSYNC. Listen, you can't judge the talent of the actors based on looks alone. These guys may have had great reads for their characters in the casting process. Each respective actor may be perfectly matched when it comes to talent and, for the casting team on this Britney biopic, the look may have been a secondary concern.

Will this *NSYNC casting make for a a major nostalgia-driven watch when the Britney Spears biopic actually drops? I think it's safe to say many of us will be watching with bated breath.