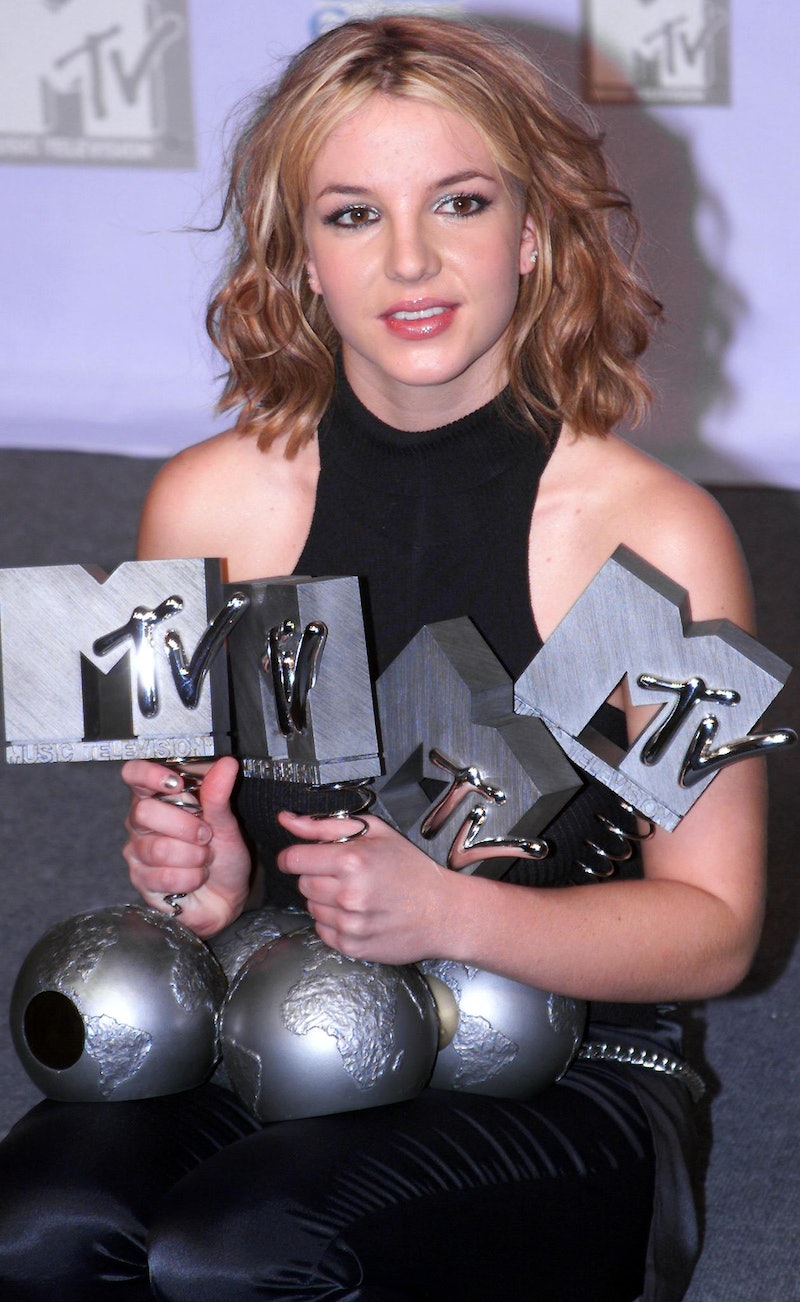 The '90s saw the rise of brick brown lipstick and iridescent eyeshadow, which we're still painting on our faces today. But modern contouring — one of the biggest beauty trends we've seen plastered everywhere lately, from television to Instagram — was practically unheard of. With it being such a foreign concept back then, I was curious about uncontoured celebrities in the '90s, and what they looked like before everyone started following the Kardashian approach to makeup.

Imagine striking the words "highlighting, "baking," and "strobing" from the vocabulary of today's beauty bloggers. That would likely eliminate half of the YouTube tutorials of the world and a handful of products used to achieve today's most popular makeup looks. But celebs weren't bothered about marking up their faces with a bunch of dots and lines and blending it all seamlessly in the '90s. "Instagram" brows and ombré lips weren't a concern either. All it took was a tap of foundation, some blush, a little color on the lips, and our favorite stars were good to go.

If it seems like the '90s were a simpler time for beauty, that's because they were. It takes a lot more to get Hollywood's hottest red-carpet-ready these days. Believe it or not, these 11 celebs once stood in front of cameras without cheekbones carved to ~perfection~.

Ah, so fresh-faced. J. Lo once strutted the red carpet without even the slightest hint of a contour. In fact, I'd bet she's barely wearing any makeup at all. Gasp!

Lopez isn't really caught without a contour these days. Peep the deep smoky eye added to her look: That's surely the stuff sultry stares are made of.

Carey went heavy on the blush and red lipstick 20 years ago. Too much highlighting and contouring probably would have looked incredibly heavy on such an already-made-up face.

Check out the bronzed goddess these days. The framing created by the contour around her temples and cheekbones gives way for light to hit her face beautifully.

Here, the Queen Bee of rap's heavy blush practically carved out her face. She and Mariah Carey must have been on the same page.

Heavy winged liner was the star of Moss' makeup routine in this look. The rest of her face didn't seem to be made up much at all.

But check out those cheekbones today. Moss has been rocking quite the strong contour lately. Kim K would definitely approve.

As a young '90s star, it makes sense that Brandy wouldn't have been spotted with cake face back in the day. I can remember her rocking plenty of brown lippies, though.

Aguilera never shied away from heavy eyeliner and washes of eyeshadow color as a teen. Contouring was one thing she did without, however.

The pop princess rocks a much fuller face of makeup today, and she certainly tries to accentuate her cheekbones with a pretty strong contour.

Yet another fresh-faced celeb, Hayek actually rocked the natural contour in the '90s. I'm also loving that '90s-perfect berry lip.

Turns out Hayek still knows how to do simplicity right. She may opt for a contour and a bold lip these days, but she doesn't weigh the look down with heavy eyeshadow or super full brows.

Anderson's high cheekbones make a contour more or less unnecessary for her visage.

The former Baywatch star is still stuck in the '90s, what with these super-thin brows, but she's introduced the rest of her makeup to 2016. You can definitely see that there's a little contouring going on here.

Strutting down runways in the decade of the supermodel, Banks was probably used to having a team of makeup artists around. It doesn't look like they were too concerned with contouring her beautiful face, though.

America's top model has jumped on the contour bandwagon now.

Stefani owned some pretty wild looks in the '90s. She usually had the most colorful hair and the darkest lips around. She may have had jewels plastered around her face, but a contour was absent.

Stefani has become quite the makeup maven these days, having landed her own collection with Urban Decay. Of course, that means she's up to speed with 2016's beauty trends, getting down with a little highlighting and contouring.

It was nice to see the most beloved pop star of the '90s without pounds of makeup on. Most of Spears' beauty looks were pretty junior high at the start of her career.

To this day, Spears doesn't load on the makeup. There's definitely a little bronzer action going on here, but this contour would obviously be way too subtle for someone like Kim K.

A trip down memory lane shows us just how much beauty standards have changed since the '90s. While we're busy carving out our faces today, celebs of yesteryear probably didn't have the slightest clue as to what contouring even meant. And you know what? They were still drop dead gorgeous.