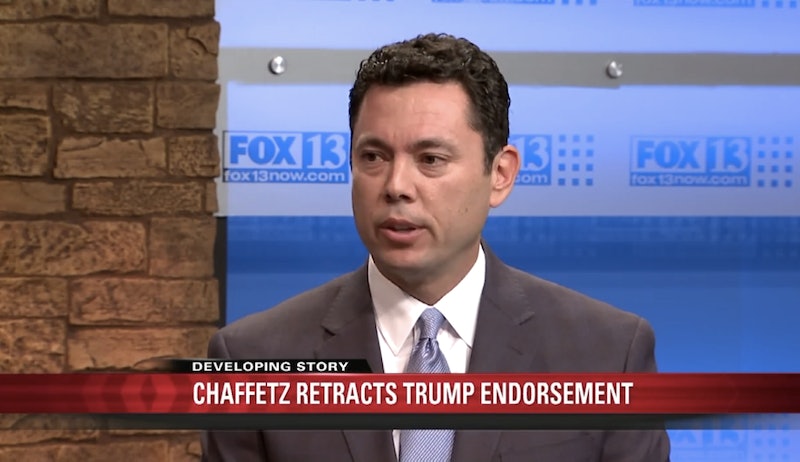 On Saturday, Ann Coulter published a tweet calling out the media for (accurately) reporting on the many Republicans who are withdrawing their support for Donald Trump after the release of a tape in which he makes vulgar sexual comments and nonchalantly boasts about groping women. “I can't find anyone who wasn’t anti-Trump ‘withdrawing’ support?” Coulter wrote. “Media: ANA NAVARRO, BEN SASSE & BILL KRISTOL WON'T SUPPORT TRUMP!”

While many of the Republicans condemning their candidate’s words are people who have openly been against him from the beginning (such as Mitt Romney, Jeb Bush, and John Kasich), there is a growing list of senators and governors who were indeed planning on voting for Trump, and who have since declared their unwillingness to go through with the support they’d previously promised.

None of these defectors have jumped over to Clinton’s side, but all have sworn that they will no longer vote for their party’s nominee. The most popular sentiment is that Trump should step down and allow Mike Pence to take the main role. Unfortunately for them, Trump said earlier today that there is “no chance” of him quitting the campaign.

Here is a list of 12 Republicans who have rescinded their support for Trump. I hope this helps Ann Coulter’s search.

The Idaho Senator published a blog post in July congratulating Donald Trump for officially becoming the Republican Party's nominee. "I strongly support his candidacy for president and now we can come together to support his call for less government and more support for veterans, law enforcement and increased safety and security."

Kelly Ayotte has never been an avid Trump supporter — having objected to his past comments about John McCain not being a war hero, a punishment needing to exist for women who have abortions, and Judge Curiel being unable to fairly preside over the Trump University lawsuit because of his Mexican heritage — but she did agree to support her party's nominee by voting for him.

Herbert is another Republican who never fully embraced Trump but who had resigned himself to give the nominee his vote.

Jason Chaffetz was a supporter of Marco Rubio during the primaries, but he endorsed Trump after the Republican Party officially chose its standard bearer. In this television interview he bluntly drops the presidential hopeful, saying, "I'm out."

Yet another reluctant passenger of the Trump Train who could not longer play along.

Heck has been a dedicated Trump supporter for a large part of this election, but it appears that the candidate's latest comments crossed the line of Heck's morals. During a rally, he said, "We deserve a candidate that can ask themselves at the end of the day 'did I live my life with honor, and do I deserve to be elected President of the United States?' I believe our only option is to formally ask Mr. Trump to step down."

Wagner only agreed to endorse Trump this summer after months of refusing to give him her support.

After struggling with whether he should endorse the Republican nominee when the state he presides over is 30 percent Hispanic, Cresent Hardy became a strong Trump surrogate. In August he declared, “I'll do whatever he wants me to do to help him get elected, and I think he’ll do the same for me.”

Back in May, a spokesperson for Davis stated that the congressman would vote for Trump if he were to be named the nominee.

“If people want change, I think their answer is Trump," said Thune in May. Well, things certainly have changed.

Capito has also been a reluctant Trump backer. She's worried about Trump's tone and ability to pivot to a more presidential demeanor since the beginning of the election, but she ultimately agreed to vote for the Republican nominee.