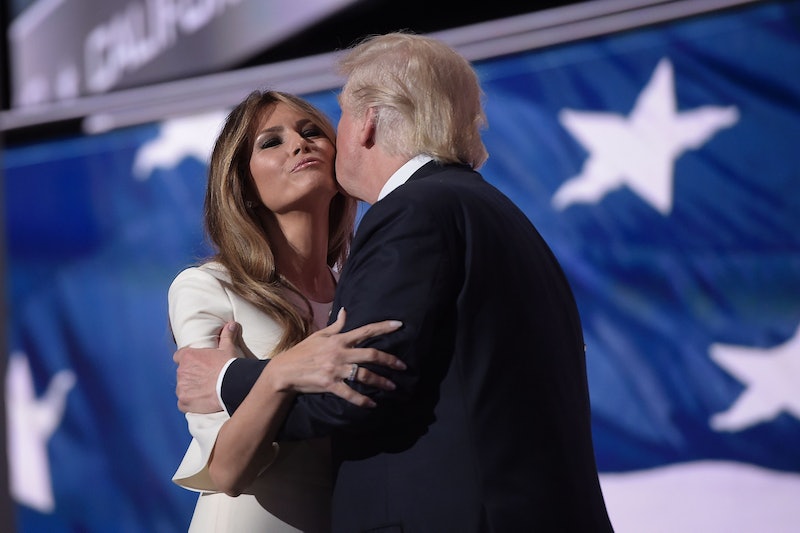 The wife of Republican nominee Donald Trump has finally spoken out about a leaked tape of her husband describing his attempts to sleep with another woman while also boasting he can sexually assault women without reproach because he's a celebrity. In a statement released Saturday by Trump's campaign, Melania Trump called her husband's lewd remarks "offensive" and "unacceptable." What an age we're living in, folks!

"The words my husband used are unacceptable and offensive to me," a statement reportedly issued by Melania on Saturday reads. "This does not represent the man that I know. He has the heart and mind of a leader." It's interesting to note that Melania condemns "the words" Trump uses, but not necessarily his behavior or attitude.

Melania's statement comes amid reports the RNC has (at least temporarily) halted pro-Trump campaign operations as more and more Republican lawmakers call for the GOP nominee to drop out of the presidential race following the Washington Post's release of a taped conversation he had with former Access Hollywood correspondent Billy Bush in 2005. In the tape, Trump can be heard boasting about a failed attempt to bed a married woman before claiming his celebrity allows him to do anything to women. "When you're a star they let you do it," Trump said on the tape. "You can do anything. Grab them by the p---y. You can do anything." At the time of the tape's recording Trump had reportedly been married to Melania for "several months," the Post reported.

Despite the degrading and abhorrent nature of her husband's comments, however, it seems Melania is ultimately choosing to stick by her man. Something she wants voters to do as well. "I hope people will accept his apology, as I have, and focus on the important issues facing our nation and the world," she said in her statement.

Melania's call to "focus on the important issues" mirrors a video statement Trump released late Friday in which he called outrage over his lewd language and cavalier attitude toward consent "nothing more than a distraction from the important issues we're facing today." Clearly, Trump's camp is hoping a "distraction" defense will help the real estate mogul turned reality TV star turned aspiring world leader weather this particular storm.

Yet with as disturbing as Trump's remarks to Bush were (and his history of sexist and misogynistic comments) it doesn't seem likely that voters, let alone down-ballot Republicans, will opt to change focus anytime soon — no matter how much Trump and Melania hope they will.