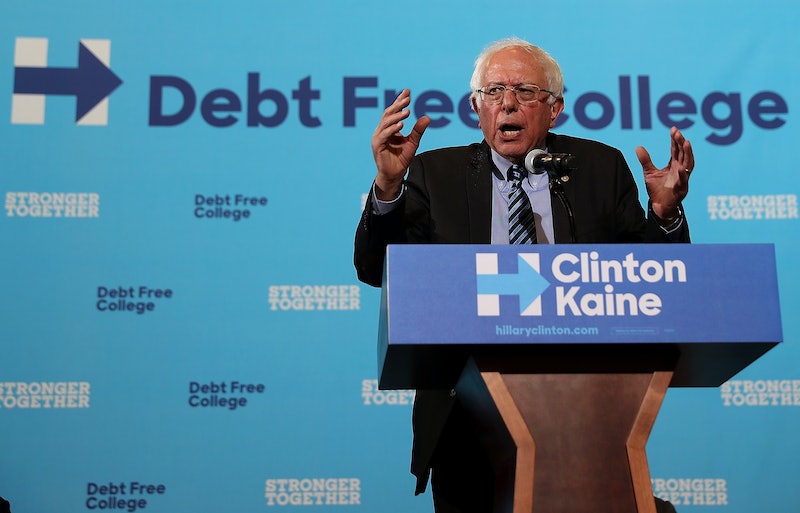 In an irate interview with NowThisNews Saturday, Bernie Sanders spoke out about Donald Trump's comments about women, saying that he couldn't even bear to repeat them. "“When you run for president, there has got to be at least a threshold of what I would call decency. Right? You can’t go around treating women as if they were objects!" Sanders told NowThisNews, apparently rhetorically.

Sanders' remarks weren't unexpected — the former candidate has endorsed his ex-rival Hillary Clinton, and has been stumping with her in the weeks before Election Day — but may hit home for "Bernie or Bust" voters who passionately supported Sanders and aren't sure they're able to vote for Clinton. Sanders, for his part, has urged his supporters to vote for Clinton since the DNC convention in Philadelphia in July. The implication is clear: Whether you support Hillary Clinton or otherwise, if you don't vote for her on Election Day, you might be complicit in allowing this man to become president.

A large part of Sanders' message since leaving the race has been: Stop considering me as a nominee, and look at Clinton versus Trump. Sadners has openly told his supporters to compare them side-by-side, and noted that, on every issue he and they care about, Clinton comes out on top.

Since the big reveal of what's now known as the "Trump Tapes," several of the Republican Party's biggest names have come out against Donald Trump — including John McCain, Mitt Romney, and Jeb Bush.

Sanders also described the content of the "Trump Tapes" specifically as "disgusting."

Trump apologized early Saturday for the comments. "I said it, I was wrong, and I apologize."

However, he has not yet commented on the leaked comments unearthed during a CNN KFile investigation, which reveals that Trump has made comments of this nature about women for much of his career.