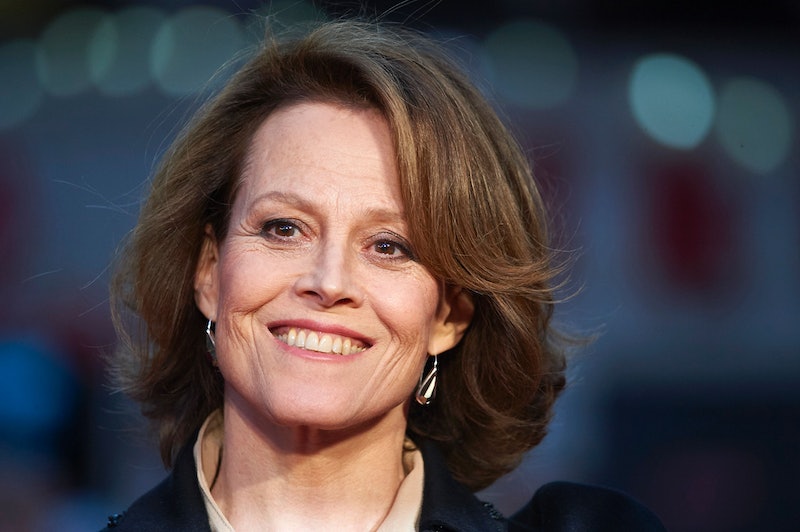 One of 2017's most highly-anticipated TV shows just got even better. At New York Comic-Con on Saturday, it was revealed that the villain of The Defenders is played by Sigourney Weaver — yes, that Sigourney Weaver. The Oscar-nominated actor will be joining the cast of the show as the Big Bad, although details of the character have not yet been announced. But even without any knowledge of what she'll be doing on the show or who Weaver will be playing on Defenders , it's impossible not to be freaking out over the news of Weaver's casting.

The announcement came at the end of Marvel's Iron Fist panel, an event that saw new footage for that show, but also, towards the conclusion, the appearance of all the Defenders cast members on stage. It would've been cool enough just to see that (Krysten Ritter, Charlie Cox, Mike Colter, and Finn Jones all together?!), but then things got even better when Marvel's Jeph Loeb hinted that he'd be revealing the actor behind The Defenders' villain for the first time. The crowd went wild when Loeb mentioned that the person was female — and then they went crazy when he revealed it was none other than Weaver, an iconic actor who, despite an impressive film career, has rarely done TV.

Yet come 2017, she'll be joining The Defenders, presumably for a full-time role. Sadly, not a single detail about her character was revealed at the panel other than the fact that it's a villain, but that doesn't make it any less exciting. Weaver has taken part in some of the most iconic franchises around, from the Alien movies to the Ghostbusters series, and so it's perfectly fitting that she'll be joining a superhero show that's bringing together four of Marvel's biggest properties.

As for which villain she might be playing? As said, it's totally unknown, but judging from Marvel history, a few possibilities include The Hand (already seen on Daredevil), Mephisto (basically the Devil) or The Hood (a supervillain who can go invisible). Or perhaps Weaver will be playing an entirely new villain, one that's either a combination of different comic characters or a creation of the Defenders showrunners.

Whoever she ends up being, there's no question that adding Weaver into the mix makes The Defenders even more of a must-see show than it already was. Can 2017 please come sooner?