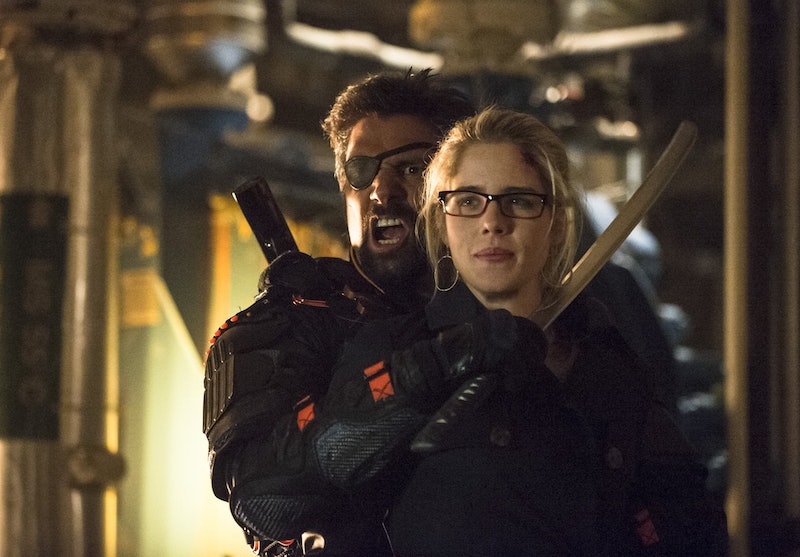 Before the Arrow season premiere aired, my back was already up about the impending treatment of the unmasked hero, Felicity Smoak. Not just because she was practically MIA from all of the Arrow Season 5 teaser trailers or that interview after interview from the showrunners and executive producers suddenly tried to diminish her role in Oliver Queen's life after four years of highlighting its importance. Even star Stephen Amell said at San Diego Comic Con that, "Oliver's most important relationship in the entire show is his relationship with Star City," making it seem like Felicity barely mattered. Then there was the indirect insinuation that Felicity was responsible for the death of the people of Havenrock, as if she had detonated Damien Dahrk's nuke herself, rather than try to direct the already detonated bomb to an area where it could do the least damage possible. Basically, everyone has been pushing aside Felicity, but they should all take a step back and remember that Felicity is the real hero of Arrow.

If the show doesn't soon acknowledge just how important Felicity is to the Green Arrow, Oliver Queen, and Star City, it'd be going against four seasons worth of episodes that say otherwise. Felicity is not just a hero in the sense that she barely sleeps in order to keep the people of Star City safe. She's a hero also in that the balance of the show rests on her shoulders, as both David Ramsey, who plays John Diggle, and showrunner Marc Guggenheim have outright admitted themselves. Case in point, Ramsey told Variety ,

...Arrow can become very brooding and dark very quickly. I always joke that thank god Felicity came in the first season so it wasn’t just Diggle and Oliver hanging around the Foundry brooding — you need some of that lightness...

And, in 2014, Guggenheim explained to BuzzFeed that, "We discovered that the show needed an element that we didn’t realize it needed, and that was this levity — this other point of view for Oliver. And it really opened the show up." As a fan of Arrow, I am fiercely protective of Felicity and the fact that she's a character who should be given the respect she deserves, especially in a genre that strives to undermine her because of her gender. Her heroism really does go beyond the practical aspect of the behind-the-scenes workings of the show. Here are just 11 reasons why Felicity Smoak is a hero and shouldn't be pushed aside any longer:

1. Oliver Needs Her, And He's Said As Much

The Green Arrow wouldn't do much saving without Felicity in his ear, in the lair, and sometimes even on the field, guiding him through with her quick thinking and technical expertise.

2. The Flash Needs Her, Too, And He Isn't Even On Her Show

Barry constantly seeks out Felicity for help, whether it be personal or professional in nature. And, considering Barry's personal decisions often affect his professional ones, *cough* Flashpoint *cough*, the people of Central City are just as indebted to her as Star City is.

3. She's A Constant Source Of Inspiration

And not just for Oliver — for the entire team. Felicity's morale and resolve has pushed the team to greater heights.

4. She Defeated The Biggest Bad Arrow Has Seen To Date

Remember when Felicity stabbed Slade in the leg with mirakuru cure while using herself as bait to help the greater good? Because I do. All while he threathed her life with a sword to her neck and undermined her courage and wit.

5. She Was The One Who Wanted To Return To The Vigilante Life To Help Thea, Laurel, And Star City

It was Oliver who wanted to leave that life behind and was reluctant to return even though his sister and fellow vigilantes had asked for his help.

6. She Isn't Afraid To Lay Down The Law

Felicity may be a mostly bubbly person, but she takes her night job impossibly seriously. Being a superhero constitutes that one has to be able to be disciplinary as well as altruistic.

8. And She Goes Toe To Toe With The Green Arrow Without Flinching

Because she isn't afraid to speak up and stand up for what is right.

9. She Has Something Even Oliver Doesn't Have: A Superpower

10. She Does Things Every Episode That Scare Her

But she's willing to make these sacrifices to further the mission and help people.

11. She's The Reason Oliver Beat The Defeated Damien Dahrk Once And For All

Yes, that's right. It was Felicity who made that hard call that Dahrk needed to be taken down. And, we all know he treats Felicity's word as gospel. She is literally the reason the world didn't end.

In the words of Felicity herself, "Boom! Drop the mic!"