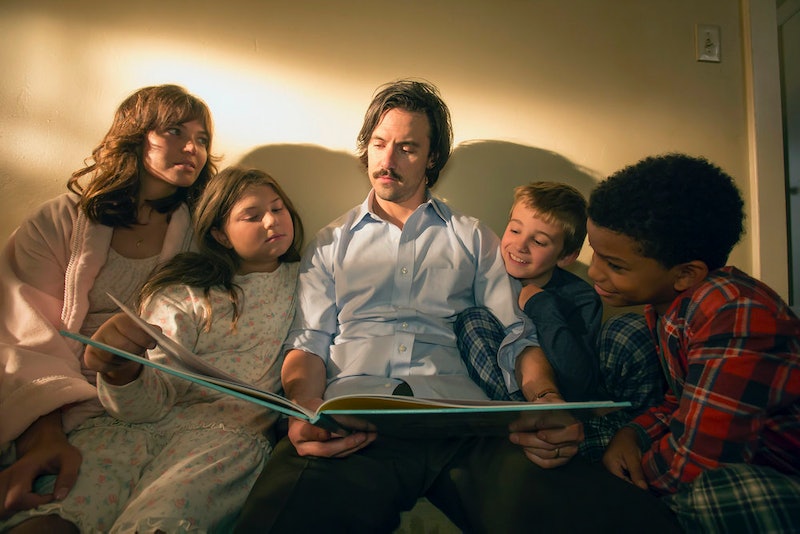 Is This Is Us going to give viewers a twist ending every episode? That's just one of the theories about This Is Us that you could be considering after the first two episodes of the NBC family dramedy ended with surprises. Spoilers for the first two episodes of This Is Us follow. After the premiere episode revealed that Mandy Moore's Rebecca and Milo Ventimiglia's Jack were actually the parents of Sterling K. Brown's Randall, Chrissy Metz's Kate, and Justin Hartley's Kevin, maybe you thought you were safe from any additional emotional bombshells. However, the second episode on Sept. 27 got viewers again when the last moments showed that Rebecca is not married to Jack in the present day, but is with his friend Miguel. This second episode revelation pretty much proved that no one is safe from the dramatic turns of this new show and at this point, any This Is Us theories are valid ones.

While anyone who had seen the movie Crazy, Stupid, Love from This Is Us creator Dan Fogelman could have seen the premise twist happening (I had seen the movie and no, I didn't see it coming), the second episode proved that consistent surprises are woven into the fabric of this series. Fogelman had warned about this during the Television Critics Association summer press tour in August with TVLine reporting that the creator said, "As we went along, I described it as like a dramedy version of Lost, where you have to understand how everyone's connected and then explore these people as we move forward." Lost was notorious for its crazy, interconnected web of characters and its shocking reveals, so if This Is Us is like Lost, then the first two episodes' endings are no flukes and you should probably expect the series to continually surprise you.

With that in mind, coming up with all types of hypotheses about where This Is Us is going seems completely rational to me. As you have to wait until Oct. 11 for the third episode to premiere, here are some theories to ponder in the meantime.

The only acceptable way that Jack and Rebecca are no longer together is if Jack is dead. While the death of Ventimiglia's character is a depressing concept, it's somehow less disappointing than if this pair is not together for other reasons. Based on how the Big Three discuss the lessons their father taught them, the vibe is definitely that Jack is dead, but let's be real — the one thing that This Is Us has shown viewers is not to assume anything, so fans will have to wait and see.

Jack's Job Leads To His Death

What Jack does for a living hasn't been revealed, but if TV has taught me anything, it's that cops need a stiff drink after a day's work. (Even if this rule doesn't pertain to my own father who is a retired police officer.) Because of Jack's potential death, hard drinking, and his strong connection to his friend, Twitter users are theorizing that perhaps Jack is a police officer or detective (he was wearing a suit and tie post-work) who gets killed in the line of duty. In this scenario, Miguel pretty much has to be his partner because TV tropes have taught me that police partners stealing your wife is a thing too. I'm skeptical since his work hours seemed too standard to support this theory, but it would lead to him having a very dramatic death.

I know, I know — this scenario is almost worse than Jack being dead, but let's just think about the possibility that Jack is alive. If that's the case, then This Is Us will need to show how this loving couple disintegrated. In an interview with Entertainment Weekly, Fogelman stirred the pot about why Rebecca and Jack aren't together anymore by saying, "The ending is a real mystery: What the f*ck happened there? Did the issues that obviously plagued their marriage like any couple catch up with them? Did something else happen? Was there a divorce? Did somebody cheat? Did somebody die? What is the story there?" While I can't handle the theory that one of them cheated, I'm going to comfort myself by imagining how good Ventimiglia will look in some magical aging makeup if he is alive in present day.

Like the above Twitter user, my friend and I have discussed if it's plausible that Miguel isn't the grandpa that Randall's kids were referring to and that Miguel just came to visit with Rebecca and Jack. That would mean Jack and Rebecca are still happily married and that Miguel got to Randall's door before Jack did. Is this completely naive of us? Probably. But since This Is Us is not above faking viewers out, I will keep holding onto the tiniest bit of hope until it's officially proven otherwise.

Randall's Family History Is A Lie

While you're probably not sick of theories about Jack, there are four more main characters to explore — and one of these characters has a different biological dad with his own secrets that are worth some speculation. Randall's biological dad William has just entered his life and as expected, there's more to him than what has been shown so far. In his interview with EW, Fogelman said the third This Is Us episode will "be the first time we explore young William. We go back to the birth of the family, we go back to that time period where we start the pilot and a lot of secrets are revealed." Does this mean that the story about Randall's mom dying in childbirth and both his parents being drug addicts isn't true? Based on Fogelman's comments, I think the next twist will deal with Randall's origins.

Gilmore Girls & This Is Us Will Cross Over

How about this totally legit theory that Jack is actually Jess' dad from Gilmore Girls? (It's reminiscent of the fan theory that Steve from Stranger Things is Park and Recreation's Jean-Ralphio's dad.) Since Jack is 36 in the 1970s, he totally could have been the real dad of Rory's bf Jess Mariano and wouldn't that explain why Rebecca leaves his cheating ass? OK, this clearly isn't an actual possibility (GG showed us Jess' dad, duh), but the fandoms just can't help themselves.

While most of the twists and turns on This Is Us can't be guessed until the series reveals more about the characters, it won't stop viewers from trying to figure out where the emotional roller coaster that is This Is Us will take them next. And if Fogelman's claim that his show is like Lost is true, there will be plenty more to theorize about throughout Season 1.