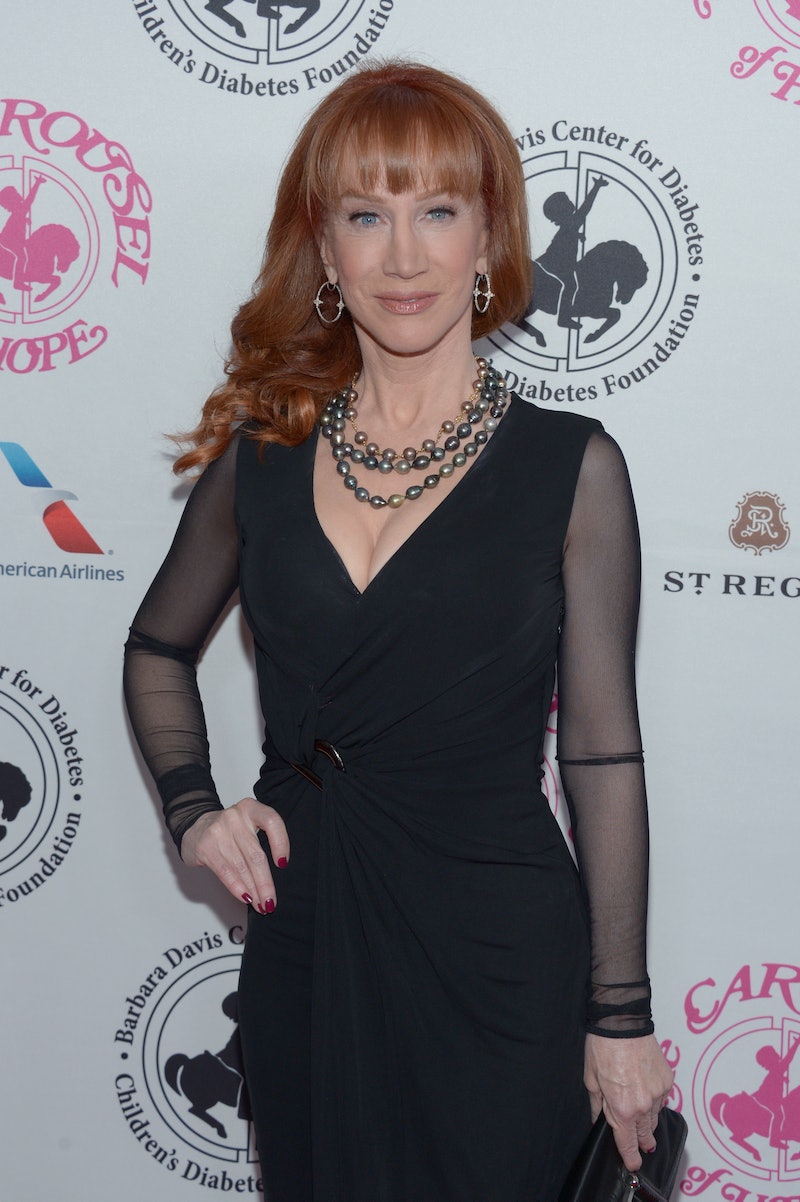 I couldn't have asked for better timing to be in the presence of Kathy Griffin, one of the most vocal celebrities when it comes to the 2016 election and, yes, Donald Trump. On Friday, the Internet understandably went ballistic when 2005 tapes of Trump speaking pretty repulsively about women surfaced. Wild timing considering the second TV debate between Trump and Hillary Clinton would roll around Sunday evening. And on Saturday, I found myself smack in the middle of it all with none other than open Trump hater, Griffin.

Amidst one of the most chaotic elections the country has seen in years, Griffin uses her platform on Twitter to educate the masses and make her opinion of Trump known. She calls him "gross," shuts down his ideals, and shares when other celebrities (like Robert DeNiro) speak ill of the candidate. Thus, the infamous tapes have her fired up.

In the tapes Trump brags about having his way with women, physically and emotionally. He says, "You can do anything [to women] when you're a star," and to "grab them by the p*ssy." His wife Melania issued an apology on his behalf the day after they surfaced. People may find his remarks amusing, but the comedian doesn't find Trump's old "jokes" very funny at all.

"I think it’s so disgusting. I think we have to be careful not to be desensitized," she says at Carousel of Hope Ball in LA. "I love when people go, ‘Are you surprised?’ It doesn’t matter if I’m surprised. It matters that he’s doing it." Griffin sees how people make excuses for the candidate, casually writing his remarks off as jokes. But she sees something more than that.

"It also doesn’t matter if he’s kidding or not. Uh, he’s not, by the way, I’m pretty good at knowing when someone’s kidding," she says. The 55-year-old and proud Clinton supporter has a message for not only Trump, but his following. "He is an extension of something that is a dying breed in this country... I always wanted to say like, ‘Whities, calm down. We’re going to be OK. Calm down, this is not a takeover,'" she says.

Come election night, Griffin says she'll probably be watching from her "screaming room" chair, and admits she's still "really, really nervous" about the outcome. In the meantime, she has opinionated anti-Trump and election tweets out there, and at least she's making her voice heard. See some of Griffin's strongest tweets below.

Griffin's passion certainly shines through — and I hope that with one more debate to go before the general election — she's just getting started.