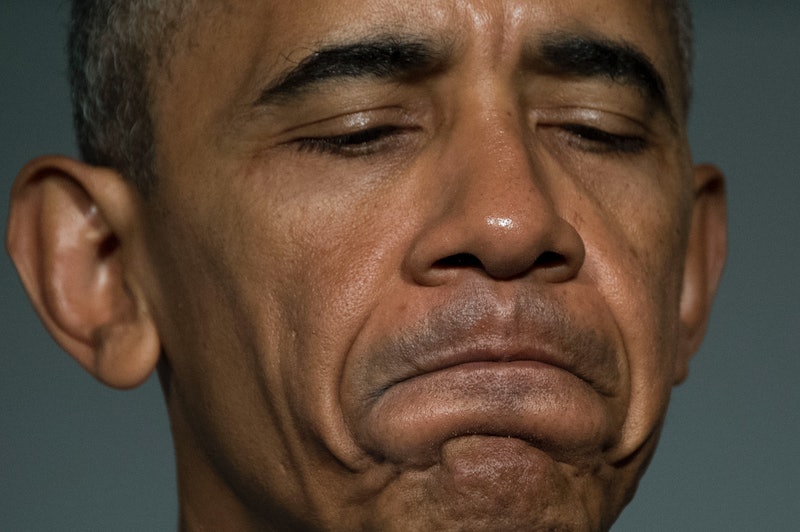 After a video was released that put on display the sexism and offensiveness we've come to expect from Donald Trump, President Obama denounced his comments in a statement full of all the fury you're feeling, too. Speaking at a campaign event for Sen. Tammy Duckworth, Obama didn't hold back on what he really thought about Trump's latest comments about women, which included, but were not limited to, "I moved on her like a bitch," "Just kiss, I don’t even wait," "Grab them by the pussy," and "You can do anything."

President Obama said, "One of the most disturbing things about this election is just the unbelievable rhetoric coming at the top of the Republican ticket. I don't need to repeat it. There are children in the room." He continued:

Demeaning women, degrading women — but also minorities. Immigrants. People of other faiths. Mocking the disabled. Insulting our troops, Insulting our veterans. That tells you a couple of things: It tells you that he's insecure enough that he pumps himself up by putting other people down. Not a character trait that I would advise for somebody in the Oval Office.

As CNN reported, Obama didn't stop there. After saying it seems like Trump doesn't care about "basic values that we try to impart to our kids," he concluded that Trump's comments tell you that "he'd be careless with the civility and the respect that a real vibrant democracy requires."

It's not the first time Obama has spoken out on the Republican nominee. In August, he declared Trump to be "unfit" to be president, likely the first time in history a sitting president has publicly made such a statement about one of the candidates. And it's not just because the candidate is from a different political party than his own. He said months ago, "I think I was right — and Mitt Romney and John McCain were wrong — on certain policy issues, but I never thought that they couldn't do the job."

Michelle Obama has also denounced Trump. At a campaign event for Democratic nominee Hillary Clinton in September, she said, "When making life-or-death, war-or-peace decisions, a president can't just pop off or lash out irrationally. We need an adult in the White House. I guarantee you."

Those statements were all made before these latest Trump comments came out. Now that the "grab them by the pussy" video has come out, Republicans are actually joining Democrats to condemn the nominee. Several Republican congresspeople have said they will not support the nominee, while some have gone so far as to withdraw their Trump endorsement. And Trump's own running mate, Mike Pence, released a statement saying he was offended by Trump's comments and could not defend them.

Whether Trump will be able to defend them himself at Sunday night's debate is unknown ... and unlikely. Of all the things he's said during his campaign — as Obama pointed out, offensive statements regarding immigrants, black people, women, disabled people, etc. — these leaked comments prompted the first time he's ever issued an apology.