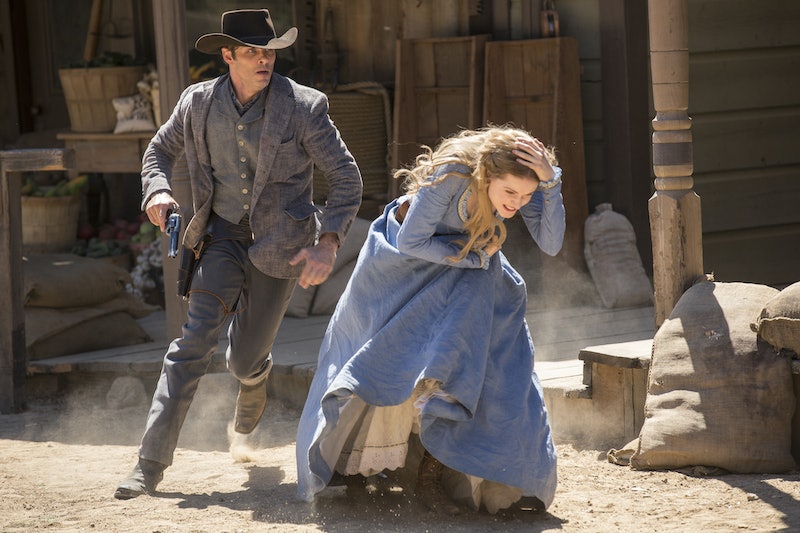 When the second episode of HBO's new drama Westworld began, we heard a voice ask Dolores, "Do you remember?" We then saw her wake up in the middle of the night and walk out into the field — the same field where she dug up a pistol buried in the dirt at the end of the hour. This sequence of events certainly seemed to imply that, despite her insistence otherwise and counter to her programming, Dolores is remembering things about her past. Well, those memories were useful on the Sept. 16 episode when they helped her break the cycle of violence she's been trapped in by her pre-programmed narrative loop.

When the familiar milk-guzzling bandit hauled Dolores into the barn to rape her, she got one up on him by stealing his pistol. But Dolores found herself unable to shoot, just like earlier when Teddy took her out for target practice. (Whether her hesitation is simply out of fear or because that's the way she's programmed is unclear.) Only when Dolores experienced a flash of memory, replacing the bandit with the nefarious Man in Black, was she able to rouse herself enough to pull the trigger and kill her attacker.

And the memories didn't stop there. When Dolores ran back out into the yard, another bandit tried to stop her from escaping. "Hey, get back here!" he shouted and drew his pistol, shooting her in the stomach. Except, a moment later, we heard the same man utter the same words — and Dolores looked down, there was no bullet wound in her abdomen. The glitch must have been her memory of how an earlier encounter went down, and she used that memory to run away before the bandit could shoot her.

As we've seen time and again, Dolores' storyline is supposed to end with the attack on her farm, and then she wakes up fresh-faced and unknowing the following morning, ready to repeat the cycle of horror all over again. But since she was able to use her memories to escape her fate this time, she's now firmly off her narrative track — and there's no telling where she'll go or what she'll do next. Dolores will be improvising from here on out, with the assistance of memories she was never supposed to have. Now we'll get to see what she's like outside of her tightly-constrained loop… and those who have wronged her should definitely watch their backs.