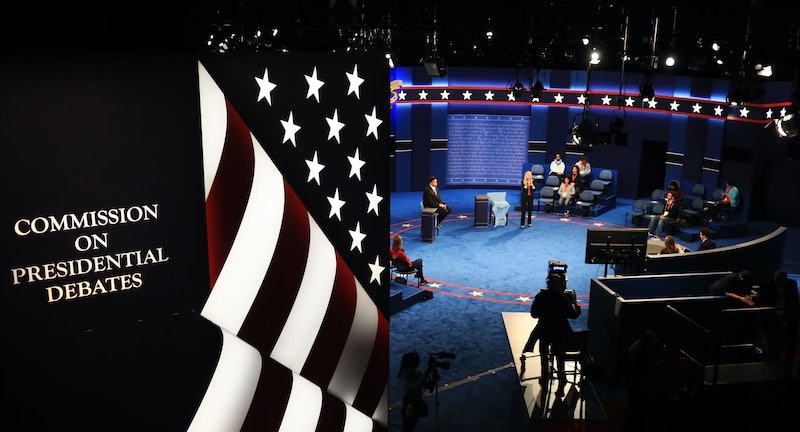 With all the buzz surrounding Sunday's round two debate between Hillary Clinton and Donald Trump, it's easy to forget that there's still the final presidential debate coming up after this one. The Democratic and Republican presidential candidates will be facing off on Wednesday, October 19 at the University of Nevada-Las Vegas in Las Vegas, NV. Clinton and Trump will be debating from 9-10:30 p.m. Eastern Time, and just like the debates before, there will be no commercial breaks.

The third presidential debate will be the candidates' second face-off in a town meeting format. What is unique about town hall formats is that only half of the questions are posed by the debate moderator; the other half are asked by uncommitted voters selected by the Gallup Organization, according to the Commission on Presidential Debates. The candidates each have two minutes to respond to each question, and the moderator will facilitate further discussion for an additional minute.

The moderator for the final debate will be Chris Wallace, the anchor of Fox News Sunday, and the first Fox News journalist to moderate a national presidential debate. Wallace has already inspired conversation around the presidential debates by telling Fox News' Howard Kurtz he will not fact check the candidates during Wednesday's debate.

"That’s not my job,” Wallace told Kurtz. "I do not believe that it’s my job to be a truth squad. It’s up to the other person to catch them on that." At the same time, Wallace says he will "try to maintain some semblance of equal time" and make sure each candidate has a chance to speak.

Additionally, it remains to be seen how much of a part personal scandals will play in the debate. Trump has been a heavy topic in the news over a 2005 tape that caught Trump saying horrifying things about women like, "Grab them by the pussy." Many well-known members of the Republican Party, including Trump's former primary opponents Jeb Bush and Ted Cruz, have publicly announced they will not be supporting a Trump presidency.

Wallace was also recently in the news for asking Trump surrogate Rudy Giuliani, who was substituting for Trump campaign manager Kellyanne Conway, if he was on Wallace's show because Conway was "unwilling to defend Trump's remarks about women," which Giuliani denied.

But Clinton is not entirely closed off to personal attacks either; during the first presidential debate, Trump threatened to say something "extremely rough" to Clinton about her husband Bill's marital indiscretions. The Trump campaign even put out a list of talking points involving women associated with Bill's extramarital affairs, according to CNN.