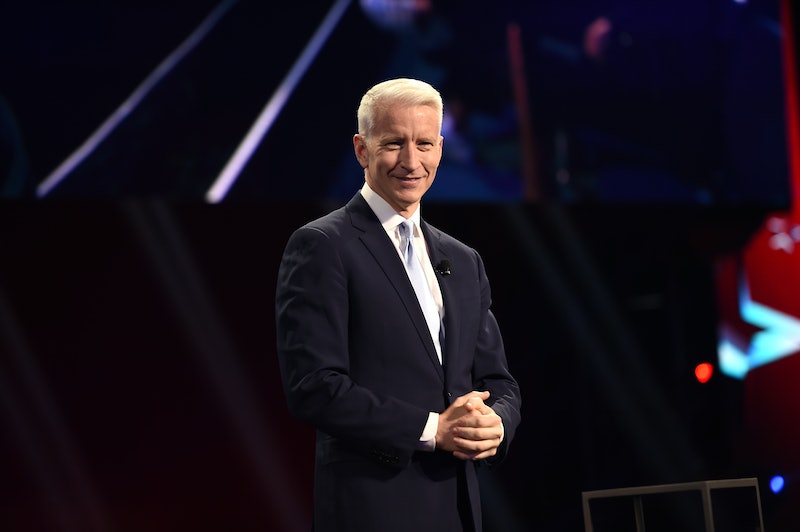 It's no surprise that Anderson Cooper is one of the richest news anchors on television. The CNN anchor, who's co-moderating the second presidential debate, is part of the Vanderbilt clan, after all. But Cooper's overall net worth is a bit lower than you would expect from a member of one of America's wealthiest families.

Cooper's net worth is an estimated $100 million — more than enough to place him among the top 1 percent of Americans. The news anchor currently receives an $11 million salary (which doesn't include bonuses) from CNN each year, according to Business Insider.

Although an $11 million salary is nothing to complain about — and also places Cooper among the highest-paid TV anchors in America — Cooper's bank account could have received an extra boost from his mother, the artist, fashion designer and heiress Gloria Vanderbilt. The Vanderbilt family was once shipping and railroad royalty, reigning over a monetarily stunning empire created by Cooper's great-great-great-great-grandfather Cornelius Vanderbilt. Now, 90-year-old Gloria Vanderbilt lays claim to an estimated $200 million net worth.

However, that money won't be going to Cooper. In 2014, Cooper said in a radio interview with Howard Stern that he won't be inheriting Gloria Vanderbilt's fortune. "My mom's made clear to me that there's no trust fund. There's none of that," Cooper told Howard Stern in 2014. "[And] I don't believe in inheriting money."

Cooper elaborated on this in a March 2016 interview with PEOPLE and Entertainment Weekly editorial director Jess Cagle. Cooper said that despite his family's great wealth, both his parents instilled in him the drive to work hard and make a career path of one's own. "I obviously grew up with great privilege and was very lucky and was able to afford college and not have student loans and they would pay for college," Cooper told Cagle. "[B]ut beyond that, it would be up to me to make a living."

Cooper added to Cagle: "I always looked at people who inherited money and they never seemed to really accomplish much on their own and it seemed to sort of change the person they were."

Everything has certainly worked out well for Cooper, who reported and interviewed and edited his way up the news journalism ladder from fact-checker to overseas reporter to celebrated TV anchor. Cooper is moderating the second 2016 presidential debate alongside ABC News anchor Martha Raddatz; both journalists last hosted either presidential or vice-presidential debates during the 2012 election season.