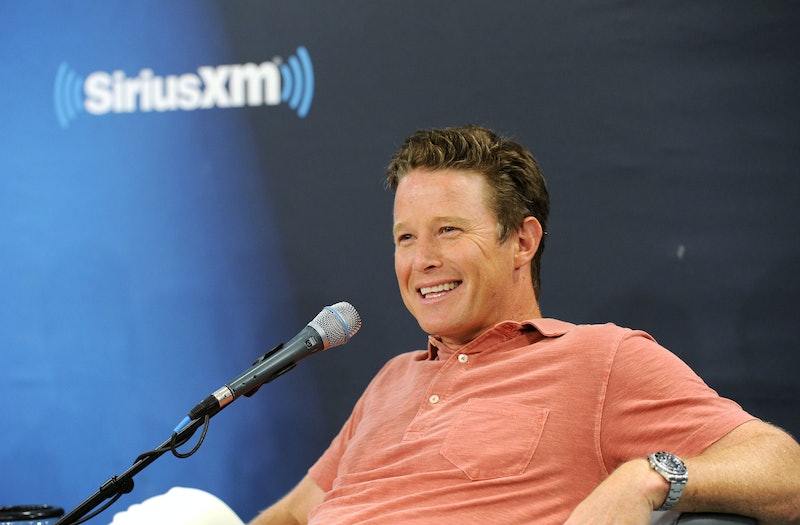 On Sunday, reports surfaced that NBC Today Show anchor Billy Bush had been suspended after The Washington Post published a 2005 recording of a conversation Bush had with Republican presidential nominee Donald Trump. News of the the announcement came first through journalists on Twitter, with some citing an email seemingly sent to NBC employees. According to the reports, Bush was suspended "pending further review."

The recording that launched Bush's reported suspension was published on Saturday by the Post. It revealed a conversation between Trump and Bush that occurred while Bush was a host of Access Hollywood. During the conversation, the duo discussed Trump's physical behavior — *cringe* — toward women. During a particularly controversial part of the exchange, Trump talked about how he thought his celebrity status helped him take advantage of women. "And when you're a star, they let you do it," Trump said, followed by Bush's, "Whatever you want." Then, Trump again, "Grab them by the pussy."

Bush responded to the recording in a statement released by NBC Universal. In the statement, he said, "Obviously, I'm embarrassed and ashamed... I'm very sorry." While necessary, that apology clearly wasn't enough to keep Bush's career unscathed. Bush joined Today over the summer, leaving his gig at Access Hollywood for the network's flagship morning show.

When Bush joined Today, an email similar to the one above surfaced, apparently sharing the news with NBC employees. Both emails appear to have come from Noah Oppenheim, NBC's senior vice president and executive in charge of Today. This time, the email was more disciplinary than celebratory, reportedly stating, "Let me be clear — there is simply no excuse for Billy's language and behavior on that tape."

Bush did not immediately respond to the news of his suspension. At the same time, Trump was preparing for Sunday night's presidential debate between him and Democratic nominee Hillary Clinton. Had of the debate, Trump had issued an apology of his own, but he also tried to deflect the attention to former President Bill Clinton. According to the Post, Trump said, "Bill Clinton has said far worse to me on the golf course — not even close."

News of the recording had already stirred buzz about Sunday's debate, with many viewers wondering how the recording would affect the dialogue between the candidates. That buzz only intensified as news of Bush's suspension circulated online. Trump's statements in the recording added to his laundry list of other offensive comments about women, in a pattern that he has largely avoided answering for during his campaign.