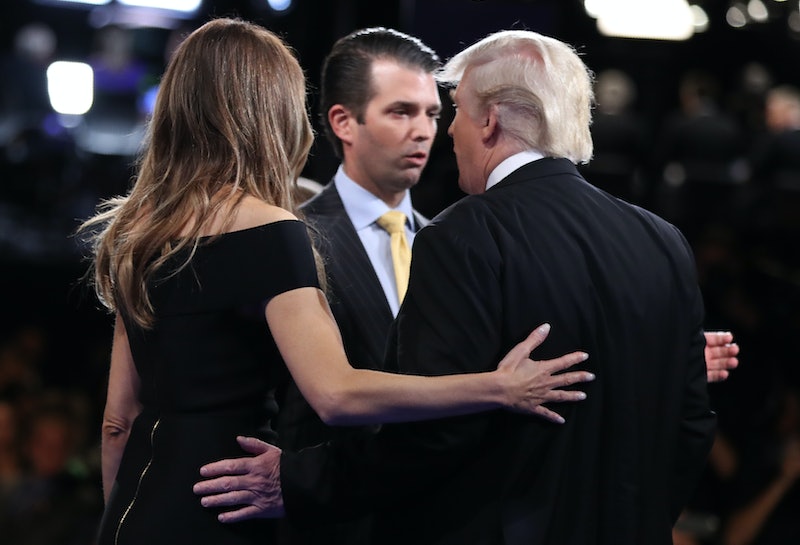 For the majority of the last 48 hours, Donald Trump has been holed up inside Trump Tower, interacting with no one but the few loyalists allowed inside the Republican nominee's hotel-turned-fortress. Though there has been some debate prep, Trump's focus has largely centered on calming the tempers of the GOP, whose members have been jumping off the Trump Train in droves since the release of the Access Hollywood tape. Perhaps to his chagrin, Trump had to emerge from the tower Sunday evening for the debate. Will the rest of the nominee's family, like Donald Trump Jr., be at the debate? They've been largely avoidant of the media since the tape was released.

But it seems that having the nominee's family absent would send even more distress signals to the GOP. Trump Jr., for one, seems excited about the debate. He tweeted and posted a photo to Instagram this afternoon from the debate venue, showing his father perched next to his podium with hands grasped. Evidently a fan of (boring) Instagram filters, Trump Jr. made the photo of the walk through black and white. The picture is accompanied by a few hashtags, including #MAGA, which proves to be the astonishingly less catchy version of Trump's "Make America Great Again" slogan.

But despite his appearance at Sunday night's presidential debate, Trump Jr. followed in his father's footsteps and cancelled at least one of his scheduled events this weekend. According to The Latern, Ohio State University's student newspaper, Trump Jr. was supposed to visit the campus on Saturday.

"Trump Jr. was set to visit several tailgates throughout campus with Tomi Lahren, host of Tomi on TheBlaze, prior to the OSU football game against Indiana," the paper reads. (Somehow, it seems extremely appropriate that the only school event Trump Jr. and Lahren were deemed fit to attend were some tailgates.) The cancellation came "according to a text message from a campaign official sent to a student with knowledge of the visit." Very official means of communication there, Trump Jr.

In addition to Trump Jr.'s cancelled appearance, Melania Trump reportedly refused to do a joint video statement with her husband following the leaked tape. Instead, Trump was seen offering an apology on video alone, looking stiff and reading from a teleprompter.

It will be interesting to see how the Trump family's appearance plays out during Sunday night's debate. Surely, they'll have their poker faces ready for when Trump addresses the scandal.