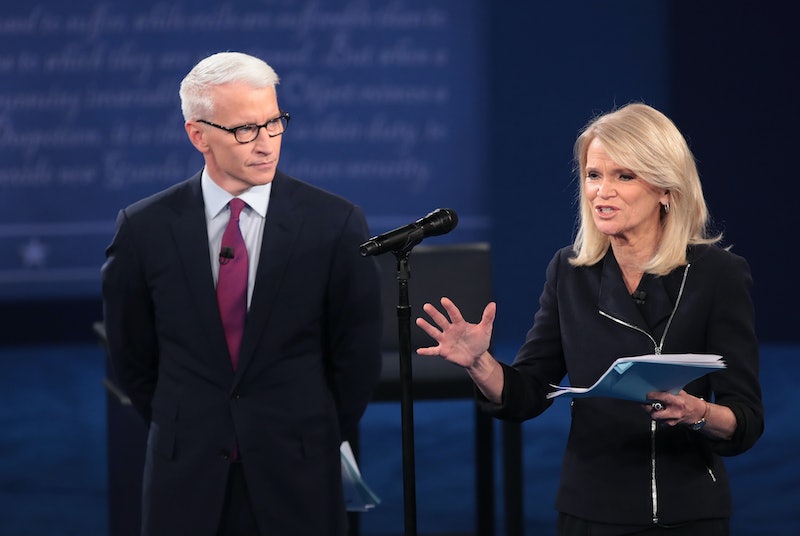 Anderson Cooper and Martha Raddatz knew going into the second presidential debate that their jobs weren't going to be easy as candidates Donald Trump and Hillary Clinton went head to head on issues including health care, foreign policy, and yes — those leaked comments Trump made in 2005. But, what they may not have planned on having to deal with was the second presidential debate audience, whose loud whooping (both in the form of applause and straight-out jeering) was almost as jarring as some of the statements being thrown out on the debate stage.

One of the first raucous moments came about 30 minutes into the debate after Trump asked Clinton once again to address her deleted emails. "If I win, I am going to instruct my attorney general to get a special prosecutor to look into your situation," Trump told Clinton. After Clinton followed up by calling all of Trump's statements completely false, there was an audible groan in the audience, and Raddatz was forced to chime in. "Really, the audience needs to calm down here."

But the crowd didn't calm down. Later, Clinton addressed the audience by saying "It's just awfully good that someone with the temperament of Donald Trump is not in charge of the law in our country." Trump deadpanned immediately after: "Because you'd be in jail," a line that was instantly met with noise from the audience.

Cooper and Raddatz were both quick to move on to the next topic, but not before issuing a reminder to the audience to remain quiet during the proceedings. "We want to remind the audience to please not talk out loud. Please do not applaud. It's just wasting time," Cooper said.

For Twitter's part, most people seem to be more impressed by Cooper and Raddatz' ability to stay calm throughout the whole ordeal.

We knew from the beginning that this debate was going to be an important one, and while some of the political jabs these candidates are taking definitely make for good television, it's important for everyone to remember — both the people within the audience and the ones talking up on stage — that there are actual political issues that need to be discussed. As Cooper says, that cheering really is just wasting time.