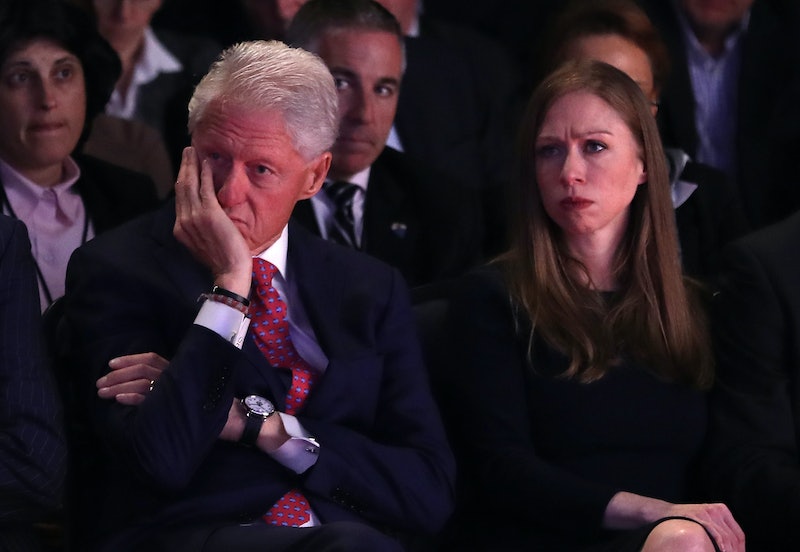 If your heart is racing while you're watching the second presidential debate at home, just imagine how rough it'd be if you were Bill or Chelsea Clinton, watching your loved one take the stage to go against Donald Trump for two hours. As usual, the duo came out to support Hillary Clinton while she stood her ground against Trump, defended her policies, and called her opponent out for those lewd leaked tapes. And, just like viewers at home, they seem to be experiencing a wide range of emotions while watching the debate go on. It's impossible to know exactly what Bill or Chelsea is thinking while watching Hillary debate Trump, but as shown by the photo below, they're definitely having a lot of feelings.

I mean, just look at this photo — it's basically art. Taken close to the midway point of the debate, the photo shows Bill and Chelsea in the audience, having what appears to be some serious, incredulous reaction to what's going on on the stage in front of them. Whether those intense stares were due to some ludicrous statement said by Trump (most likely) or something said by Hillary, it doesn't matter — halfway through a debate in which everything from whether Trump has committed sexual assault to if Hillary will be studied by a special prosecutor if Trump is elected had been discussed, the Clintons' "Oh, god" expressions summed up what everyone watching at home was feeling, too.

Kudos to them for not just having their jaws dropped on the floor throughout the entire debate, and kudos to all of us for making it through the debate in one piece.