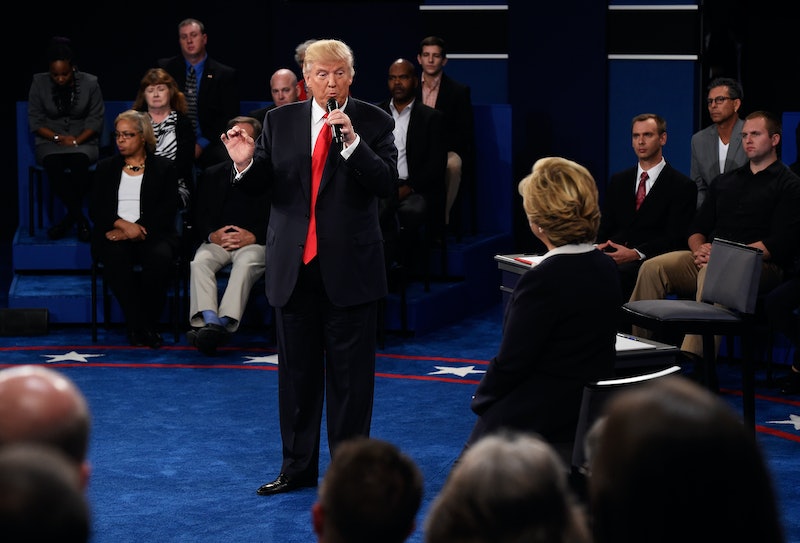 The whole purpose of the second presidential debate is for candidates to make their platforms crystal clear, and to answer any lingering questions from the American people who may still be on the fence about who they want to elect as president come November. The debate on Sunday night was set up in a town hall format, meaning that a panel of "undecided" voters was in the audience to ask candidates questions about everything from domestic healthcare to climate change to energy policies. As moderator Martha Raddatz explained at the beginning of the debate, those voters sitting on stage were selected by the Gallup organization. They're from the St. Louis region (the debate was held at Washington University), and each of them told the polling company that they "haven't committed to a candidate" — at least, they hadn't going into the second debate. But, just one look at their faces midway through the ordeal on Sunday night seems to suggest they have made up their minds — and it doesn't look great for Trump.

That gentleman's face in the middle row? You know, the guy with a look that is 100 percent "WTF" while Trump addresses his side of the room? That is the face of a man who wants Nov. 8 to just get here, already. Hey, we all do.

It took both Donald Trump and Hillary Clinton about 30 minutes to get to the actual policy issues at hand during a debate that was supposed to be addressing, you know, policy issues (to be fair, there were those heinous comments Trump made about women in 2005 that needed to be addressed first), but once they were able to start answering audience questions without wildly pivoting to other topics, it wasn't long before the undecided voters in the room seemed to form a pretty good idea of whose side they were on — that is, if their facial expressions are anything to go by.

It wasn't exactly an easy night for Trump. For one thing, he had to answer for the offensive and tone deaf comments he made in 2005 about treating women. And, between being asked about his proposition to ban Muslims from entering the United States and about other offensive comments he made previously about Miss Universe winner Alicia Machado, there wasn't a whole lot of softballs being lobbed his way. But, that's the point of these debates in the first place — to give candidates an opportunity to explain their ideas, and for voters to inform a more rounded opinion based on the information being presented. And, for better or for worse, that seems to be exactly what happened.